One of the greatest sportsmen of all time, and look at him now. It’s hard not to think of Michael Jackson, the other superstar currently in the news. And to a slightly less spectacular degree, Gazza and George Best. Will we be watching Rooney self-destruct in a few years time? Or one of the Ronaldos? Or Beckham? I guess there are plenty who don’t – for every Maradona, Best or Gazza there’s a Pele, Charlton or Lineker – but it’s a grim precedent even so. 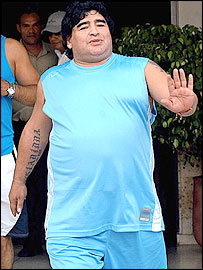