I went to see the Modernism: Designing a New World exhibition at the V&A, which was good. It was largely what you’d expect – white houses, angular furniture and posters with large sans serif headers printed at an angle – although there were some treats and surprises, like a Tatra T-87 saloon car. 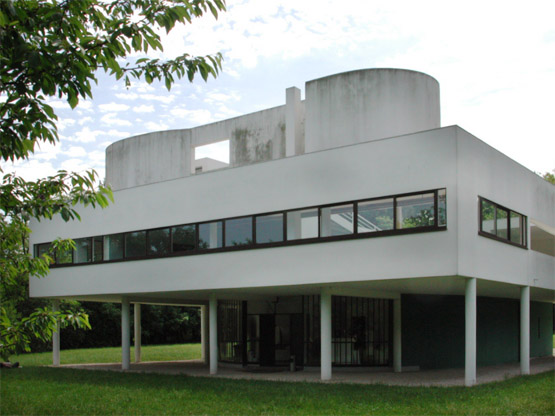 Looking at the best of the modernist buildings, like the Villa Savoye and thinking of all those lumpen, red-brick, pitched-roofed houses that the British construction industry threw up over the course of the C20th, you can’t help feeling that our suburbs might be less ugly if we’d embraced modernism a bit more. Of course no style or philosophy is a substitute for a good architect. An industry that cares so little about aesthetics and design would only produce equally lumpen, graceless buildings in white-rendered concrete.

Incidentally, note that many of the most successful modernist dwellings seemed to be (like the Villa Savoye), stand-alone houses set in the country, where the trees provide a soft green background to the starkness of the design and the sweeping picture windows can look out over beautiful views. The large scale housing projects – and there were plenty of those in the exhibition as well – struggle to have the same impact. With rows of separate buildings, the effect can be rather a lot of visual clutter; perhaps because Modernism eschews decoration, so the aesthetic effects are achieved with structural elements – i.e. the shapes of the buildings. Or something. I haven’t really thought that through yet.

One of the odd things about the exhibition was that it was a constant stream of utopian, reformist ideals, but in the back of your mind was that the period it dealt with was bookended by the Great War and the Russian Revolution at one end and World War Two at the other, with the Depression and the growth of Fascism in the meantime. And yet somehow, all these idealists who were trying to change the world by giving the working man an efficient living space with Licht, Luft und Sonne seem to fit quite well into that kind of background. The wish to change the world by throwing out everything old and rebuilding it from scratch, to draw a line under ten centuries of European history and say “we can do better than that” has its echoes in the politics. Of course revolutionary Russia was one of the centres of early Modernist design.

And while I’m sure they wanted nothing but to make people’s lives better, the rhetoric – of the house as a ‘machine for living’, of progress, efficiency, mass-production – can be rather dehumanising. It reeks of top-down planning. And then there’s all the stuff about ‘hygienic’ living, with its celebration of cleanliness and the body. There’s a section about it in the exhibition, including some film of the ‘Sokol Slets’ – massed displays of gymnastics in Czechoslovakia which look like something Reni Liefenstahl would have dreamt up after eating too much cheese.

Despite all the dubious parallels I’m drawing, it’s worth pointing out that both Hitler and Stalin disliked Modernism. Their idea of a good building was one smothered in heavy-handed political symbolism. And although some of the architects and designers were quite political (mostly leftists of various kinds, but some of the Italian Futurists were Fascist sympathisers, apparently), I’m not suggesting that any of that is terribly relevant to the actual buildings. I’m just drawing connections because I think it’s interesting.

In Praise of Shadows