Imperial Life in the Emerald City by Rajiv Chandrasekaran has the subtitle ‘Inside Baghdad’s Green Zone’; the Green Zone being the seven square mile compound in Baghdad centered around the Republican Palace, where the Coalition Provisional Authority (CPA) under L. Paul Bremer III attempted to rule Iraq for about 12 months after the fall of Saddam Hussein.

Chandrasekaran paints a picture of a little American bubble where the water and electricity are always working and the air conditioning is on high, the buffet is piled with pork, there are bars and bible study classes, no-one speaks Arabic, and the huge blast-proof walls keep out the noise of gunshots and the call to prayer. Even the food, down to the water the hot-dogs were boiled in, was all shipped in from approved suppliers outside Iraq. 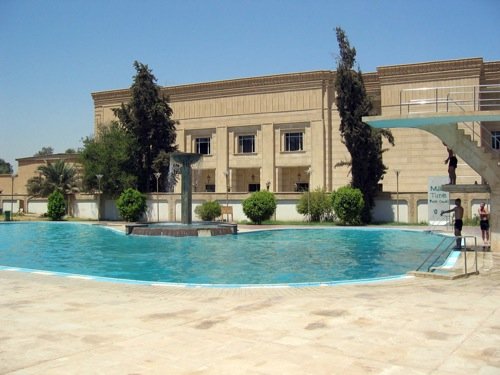 Swimming pool at the Republican Palace, 2003. Image taken from Wikipedia, and used via a GFDL licence.

Here’s a story which captures some of that disconnection between the people inside the compound and the world around them. It takes place at a farewell party about six weeks before the handover of sovereignty:

It had been a quiet night. No mortar thunderclaps. No messages from the Giant Voice warning people to take cover.

Then came the gunshots. A pop-pop-pop in the distance. Alex Dehgan, a State Department employee at the pool party, dismissed it as a firefight between soldiers and insurgents. So did his colleagues.

But the popping grew louder, more intense. It seemed to be coming from every direction. Orange tracer rounds arced into the night sky. Bursts of AK-47 fire echoed across the Tigris.

Dehgan began to panic. This is it, he thought. The full-on assault. They’re going to crawl over the walls.

He and everyone else by the pool scurried indoors. Some ran into the basement shelter. Others retreated to their offices but stayed away from the windows. They began to wonder if they’d have to leave by helicopter, like the last staffers at the American embassy in Saigon.

Hours later they heard the news: Iraq had defeated Saudi Arabia 3 to 1 in a soccer match, earning a berth at that summer’s Olympics in Athens.

As I hope that story shows, the book is a great read and full of good anecdotes. It would be funny if it wasn’t so incredibly depressing. Ham station, originally uploaded by Kjirstin. Used under a CC by-nc-sa licence. This picture was taken in the Green Zone, but it’s from after the CPA period; the Green Zone is now the US embassy compound.

If these people had some other, less important job, this might not matter very much. But they were supposed to be running the country. Here’s another quote that seems typical:

Agresto [senior adviser to the Ministry of Higher Education] knew next to nothing about Iraq’s educational system. Even after he was selected, the former professor didn’t read a single book about Iraq. “I wanted to come here with as open a mind as I could have,” he said, “I’d much rather learn firsthand than have it filtered to me by an author.”

In fact Agresto turns out to be, relatively speaking, one of the good guys. When he got to Iraq and encountered the reality of the situation there, he was adaptable enough to set aside his grandiose plans for Iraq’s university system and focus on the pragmatic business of trying to help the universities recover from the damage done by sanctions, war and looting. He didn’t actually manage to achieve much, because he didn’t have the staff or money to do it, but at least he responded to the situation by changing his plans. Most of his colleagues seem to have ploughed on regardless. Still, that mindset, that a career in American academia and an open mind were all the preparation he would need, seems typical of the overconfidence and naivety of the CPA.

Also typical was the choice of a Republican loyalist rather than someone with specific experience of the Middle East or reconstruction in a war zone. Not, I think, out of simple corruption or nepotism, but because it was an operation being run by ideologues from the White House downwards; people who seem to have believed that democracy, privatisation and a free market were some kind of magic wand, and if they could just pass the right laws, the recovery of Iraq would take care of itself. The problem wasn’t so much the fact that they were trying to impose their own political beliefs on the Iraqis, but that they were focusing on theory while Iraq was lawless, unstable, and suffering 40% unemployment and shortages of electricity and fuel.

And that’s just the start of it. There were failures of communication—or overt hostility—between the Pentagon and the State Department, between the CPA and the Iraqis, and between the CPA and the army. They were more worried about how news would play in the US than in Iraq. They didn’t trust the Iraqis to do things for themselves. They didn’t have nearly enough money or enough staff. They allowed the timetable to be driven by the American elections. Over and over again, it all seems to come back to the looting which was left to go unchecked in the week or so after the fall of Saddam, both because it established a pattern of lawlessness and because it crippled half the institutions in Iraq. Hospitals, universities, ministries, schools and businesses lost the equipment they needed to function.

My impression is that the White House and the Pentagon simply didn’t take what they were doing seriously enough. I don’t care how confident they were that, with Saddam out of the way, the Iraqis would gratefully embrace freedom and democracy: they still needed to make plans. Even with the best possible outcome, they would still have been running a whole country, and they seem to have thought they could just wing it.

Anyway. From a British point of view, I would have liked some kind of indication of how my own government fit into the whole situation, but this is a very good book: vivid, thorough, funny, and deeply sad.