With Beckham and Harry Potter both being in the news at the moment, I started seeing them as a parallel pair: you can identify lots of sound reasons why Becks is a big star and the Harry Potter books have sold so many copies, but in both cases you’re left with a sense that their actual level of success is out of proportion. 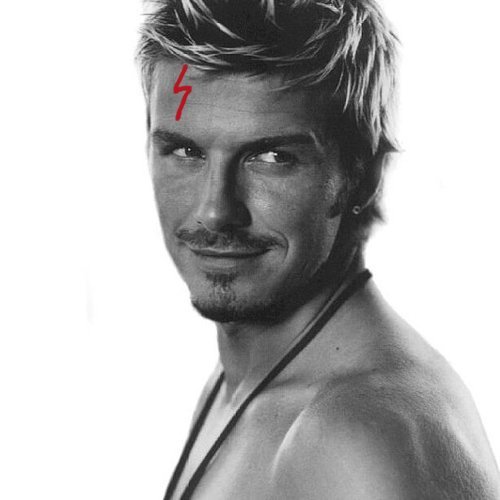 If anything it’s easier to see why David Beckham is a star: he was a key member of the most successful incarnation of the most popular team in world sport; he started going out with, and duly married, a member of one of the most successful British pop groups of all time when they were at their peak; he’s incredibly good-looking, and not just by footballer standards; he played a key role in some of the most memorable moments for the England football team; and his whole metrosexual, homoerotic image seemed genuinely radical in the blokey, working-class context of British football. And he seems like a nice man.

And yet… how did all that amount to him becoming a global superstar, without him, for example, winning the World Cup? Having lived through the whole period of his rise to prominence, I know that, in a British context, it all seemed to make sense at the time. But did the sarong really make a big impact in Tehran? Were the Spice Girls such a big deal in Shanghai? I remember reading about a journalist who went to do a story about would-be suicide bombers in Palestine. While he was interviewing them, someone came in with the football results. “Manchester United won!” (much cheering) “and Beckham scored!” (even more cheering, and cries of Allahu Akbar! Allahu Akbar!). Why him, and not Ryan Giggs, or Michael Owen, or any of his other talented contemporaries? Raul? Batistuta? Figo?

The same can be said about the Harry Potter books (and indeed the Spice Girls). You can easily find reasons why they’re popular: they combine a sense of teen alienation with an inventive magical world; boarding school stories are popular; the wordplay is entertaining. There are a lot of boxes being ticked. But why are they a complete publishing phenomenon? Presumably J.K. Rowling has no more idea than the rest of us. After two or three books, did she ever lie awake at night wondering whether she was going to suddenly lose her touch, and her fans would pick up the next volume, read a hundred pages and never quite feel the need to finish it?

It’s easy to dismiss it as being driven solely by ‘hype’. And there is clearly a snowball effect where the marketing people seize on a success and drive it forward by spending money on it. But if it was as easy as that, there would never be a blockbuster movie that flopped or an unsuccessful second album. LA Galaxy may well be about to discover that no amount of hype can magically persuade people to spend money on something that doesn’t interest them.

And I’m not saying that they are overrated, exactly. Beckham at his best is a very very good footballer; the books are an enjoyable read. But Beckham would have to be Pele, Puskas and Cruyff rolled into one to justify his profile, and the Harry Potter books have been so freakishly successful that it would be disproportionate for anything short of the second coming of Shakespeare. That’s not their fault. I just wonder how it happens. Some magic combination of ingredients? Mob hysteria? Blind luck?