Nearly all Welsh this year, I think. I’ve seen bugger-all in the garden, and haven’t done that much birding, so it’s mainly down to my spring trip to Pembrokeshire.

Before I get onto that, though, my other notable birdy trip this year was to the WWT reserve at Welney, where they feed the overwintering swans. They weren’t there in the kinds of numbers that they have been sometimes in the past – apparently the whooper swans migrate down through northern Europe and they think because the weather had been mild they were still in Germany or the Netherlands. But they were there, and they are lovely birds which I don’t often see, so that was nice. All the swans in this picture are the wrong species, so you’ll have to take my word for it that there were whooper swans there as well.

So, Pembrokeshire. Lots of the relatively common stuff: sedge warblers, whitethroats, linnets, stonechats, marsh harrier, spotted flycatcher, peregrine. The best bird other than my main target species was garganey, a very attractive little duck and a British tick for me. Oh, and grasshopper warbler deserves a mention, too, especially since I spent so long trying to find the damn thing: it has very distinctive call, a kind of mechanical buzzing, but it lurks.

But the birds I went there for were those of the cliff-tops and offshore islands. The most boring of them were the rock pipits, which are a genuine cliffy speciality but let’s be honest, they have the charisma (and indeed general appearance and personality) of mice. Much more exciting were the choughs [‘chuffs’]. To slip into Shakespeare for a moment:

When they him spy,
As wild geese that the creeping fowler eye,
Or russet-pated choughs, many in sort,
Rising and cawing at the gun’s report,
Sever themselves and madly sweep the sky,
So, at his sight, away his fellows fly

Choughs aren’t actually russet-pated, as such, they have red beaks and legs. Very attractive birds, and they make this great metallic chee-ow noise as they fly around. Here’s my photo, not the best ever, but it gives you the idea: 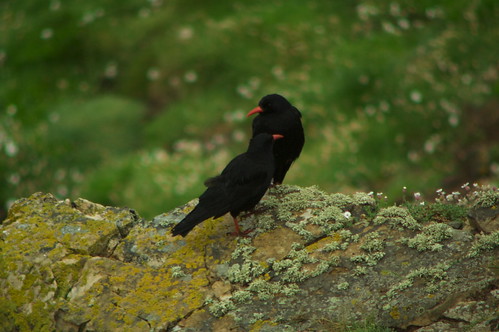 Chough might be a real contender for bird of the year except that I’ve seen them before, years ago in Morocco.

After that, it’s all sea birds, starting with gulls and the fulmar, a bird which looks superficially like a gull but is actually a tubenose; sort of like a tiny fat albatross. Then there’s the cormorant and its more glamorous cousin the shag (a really gorgeous bird, with an oilgreen tint to its black feathers, a yellow gape and a little Tintin crest). And I took an evening boat trip to see another tubenose: the Manx shearwaters coming in to land. They feed their young at night to avoid predators, so although on the island of Skomer I saw lots of dead ones in various states of disintegration, I didn’t see a single live one. Apparently they make an unholy racket during the night, though.

Confusingly, Manx shearwater has the Latin name Puffinus puffinus, which leads me onto my last set of birds, the auks. Three species, the guillemot, the razorbill, and the puffin. 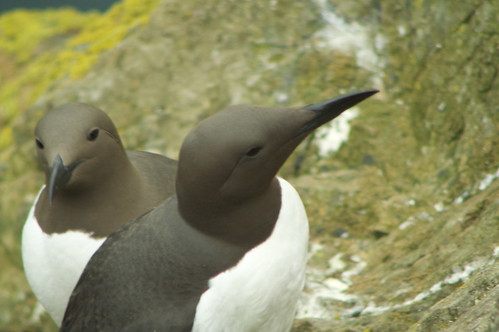 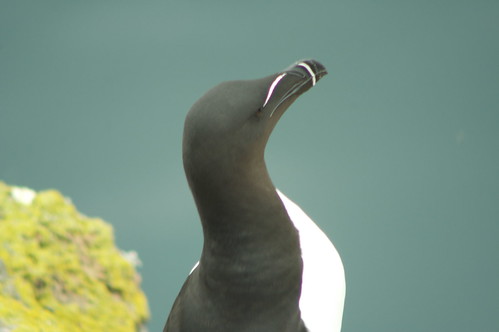 They are all beautiful species, and it was great to take a boat trip to see the huge colonies on the cliffs with thousands of guillemots and razorbills — and to see a raven stealing guillemot eggs — but the reason I went to Wales and my Bird of the Year 2008 is puffin. Atlantic Puffin, Fratercula arctica, to be exact. 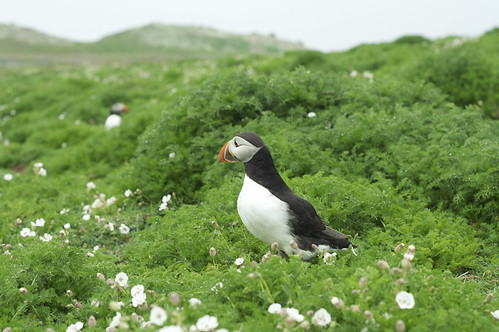 If you feel cold at this time of the year, spare a thought for the puffins, which overwinter out in the middle of the north Atlantic. Brrr.

Thanks, and a happy New Year to you too!