I went along to the Futurism exhibition at Tate Modern. Having sometimes commented on the excellence of past Tate exhibition websites, I have to say they’ve fallen down on this one — nothing to see at all. And they also didn’t have any exhibition booklets, so I have no aide-mémoire at all.

EDIT: they now have a much improved website up, so they obviously just hadn’t got their act together yet. Who knows, maybe they have some booklets ready as well. 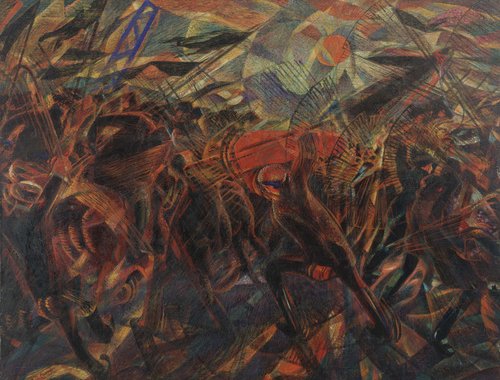 The Futurists were the early Italian Modernists — most of the paintings were pre-First World War — who were keen to embrace modernity, speed, machines and suchlike. They’re probably most famous not for any of the paintings but for the Futurist Manifesto, written by Futurist poet Marinetti. And whatever its aesthetico-philosophical merits, it’s punchy stuff; this is point 4:

4.—We affirm that the world’s magnificence has been enriched by a new beauty: the beauty of speed. A racing car whose hood is adorned with great pipes, like serpents of explosive breath—a roaring car that seems to ride on grapeshot is more beautiful than the Victory of Samothrace.

Admittedly some of it is a bit less appealing; this would be unpleasant anyway, but it’s even more so in the context of the upcoming war:

9.—We will glorify war—the world’s only hygiene—militarism, patriotism, the destructive gesture of freedom-bringers, beautiful ideas worth dying for, and scorn for woman.
10.—We will destroy the museums, libraries, academies of every kind, will fight moralism, feminism, every opportunistic or utilitarian cowardice.

Which segues neatly into the other thing that the futurists are famous for: Fascism. You can see how all the rhetoric about war and power and modernity might appeal to the same people who liked Fascism; and after the war, Marinetti founded a Futurist political party which ended up being absorbed into Mussolini’s Fascists. But the Tate makes a very reasonable case that it is unfair to tar all the Futurists with the same brush. So much happened between 1909 and the 1930s — the war, the Russian Revolution and the Great Depression, for a start — that you need to be very cautious in drawing any link between provocative aesthetic statements before the war and the politics of 25-30 years later. 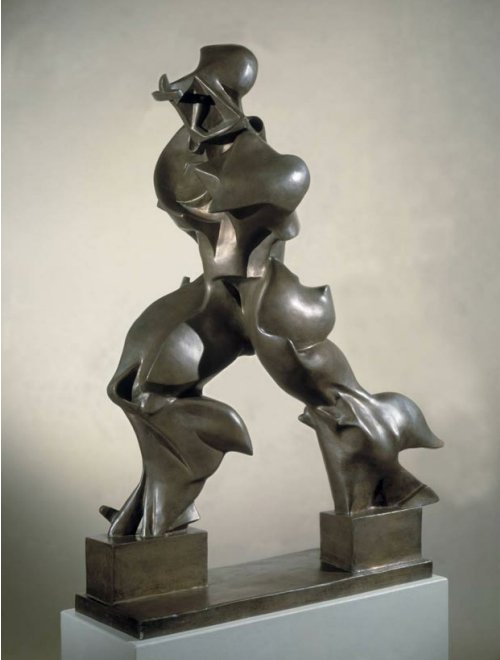 And in fact many of the pre-War Futurists had left the movement by then, apparently. The reality of full-scale modern mechanised warfare left them less enthusiastic about the idea of machinery and war. And indeed some of them, like the Russian Futuro-Cubists, went in the other direction to produce Constructivist posters for collectivist farms.

One thing I rather enjoyed was one of the many manifestos: ‘Vital English Art’. This was published in the Observer in 1914:

I am an Italian Futurist poet, and a passionate admirer of England. I wish, however, to cure English Art of that most grave of all maladies—passéism. I have the right to speak plainly and without compromise, and together with my friend Nevinson, an English Futurist painter, to give the signal for battle.

1.—The worship of tradition and the conservatism of the Academies, the commercial acquiescence of English artists, the effeminacy of their art and their complete absorption towards a purely decorative sense.
2.—The pessimistic, sceptical and narrow views of the English public, who stupidly adore the pretty-pretty, the commonplace, the soft, the sweet, and mediocre, the sickly revivals of medievalism, the Garden Cities with their curfews and artificial battlements, the may-pole Morris dances, Æstheticism, Oscar Wilde, the Pre-Raphaelites, Neo-primitives and Paris.
3.—The perverted snob who ignores or despises all English daring, but welcomes eagerly all foreign originality and daring.

8.—The old grotesque idea of genius—drunken, filthy, ragged, outcast ; drunkenness the synonym of Art, Chelsea the Montmartre of London ; the Post-Rossettis with long hair under the sombrero, and other passéist filth.
9.—The sentimentality with which you load your pictures—to compensate, perhaps, for your praiseworthy utter lack of sentimentality in life.

[all the usual Futurist guff; I can’t be bothered to type any of it out]

Ah, what fun. You gotta love the ‘Art Rebel Centre’.

As a geeky aside, the multi-media guide (basically an audio guide with a few still photos) was excellent. Last time I got an audio guide at Tate Modern I said this:

The commentary has a kind of coy, knowing, vaguely patronising tone, as though the narrator was trying to seduce a slightly dim 12-year-old…. It was also short of insights that reached beyond the blindingly obvious. If I’m standing in front of a painting, I don’t need the guide to carefully tell me what the painting looks like; I want some kind of extra information that I can’t see for myself.

… instead of the standard audioguides with a big keypad, the Tate has got some little touchscreen devices. Which would be fine in principle, except that the touchscreen is erratically responsive, you have to carry around a stylus, and the user interface is badly designed…. I spent a couple of minutes trying to figure it out and nearly crumbled and went and asked for help. Even when it was working, some design decisions were just bad; for example, when you pressed the ‘Go’ button to start a recording, the screen changed and the play/pause appeared on exactly the same part of the screen, with the result that many times, I accidentally pressed the screen twice and found I had paused the audio by mistake. And just when I was coming to the end of the exhibition, it crashed and I lost the tour altogether.

Well, this time the guide was much better written; it actually added useful context and information I wouldn’t otherwise have. And they’ve sorted out the hardware by getting some iPod Touches. Admittedly since I have an iPhone it wasn’t a fair test of how intuitive it would be to just pick up and use, but it has to be better than the crap they were using before.

Personally I would like it even better if they would let me buy the guide through iTunes and use it on my own phone or iPod, with my own headphones: either as a stand-alone application or just as a set of audio or video files. Why not? That would save them worrying about people nicking their equipment — I had to leave some ID as a deposit — and it would mean I could listen to the introductory blurbs on the train on the way to the exhibition. Or refer to them at home later.

» Carlo Carrà’s The Funeral of the Anarchist Galli is currently in the Tate but normally lives at MoMA. Umberto Boccioni’s Unique Forms of Continuity in Space is part of the Tate’s own collection.

‘The Mating Mind’ by Geoffrey Miller