I’ve really been enjoying the Twenty20 World Cup, and the more I see of twenty-over cricket and the more it matures as a game, the the more I think it’s a brilliant invention.

Someone has finally invented a form of the game where every ball is interesting. Before it started, the assumption was that T20 would be all about sixes; but it’s equally true that it’s all about dot balls. I mean really, a form of cricket where a dot ball is an exciting event: it’s a fucking miracle. 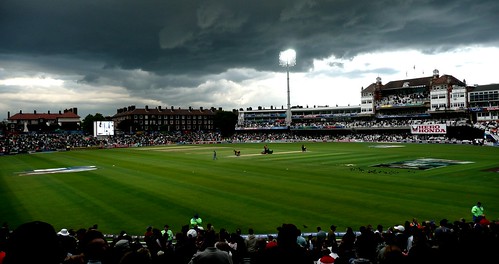 And I love the fact that it legitimises six-hitting. Even Test-cricket purists love to see big sixes. But really, in Test cricket, it’s a self-indulgent shot; the shot of a show-off. You can argue, perhaps, that it’s a valuable weapon in the psychological battle between bowler and batsman; and there are a few situations, like hastening a declaration or when a batsman is running out of partners, where it makes more sense; but the honest truth is that usually the extra two runs are just not worth the risk.*

In 20 over cricket, though, where run rates are so important, it is an entirely reasonable calculated risk. Even in Twenty20 there’s a risk of overvaluing sixes; it’s noticeable that the most successful batsman of the tournament, Tillekeratne Dilshan, is not a big six-hitter, and has racked up most of his runs as fours. But it is certainly a legitimate shot, and as a supporter you can just enjoy the spectacle, without that queasy sense that it’s all about to go pear-shaped.

Don’t get me wrong, I love the different pleasures of Test cricket. Admittedly, it can be the most tedious game in the world. But at its best, the slowness of Test cricket is its great strength. It’s the gradual ratcheting up of tension, the shifting balance of bat and ball, the psychological endurance needed for a long innings. At its best it doesn’t just produce exciting moments, it produces engrossing passages of play that develop over an hour or an afternoon — which is why it never works that well as highlights. It’s seeing the batsman playing and missing over and over, the ball whistling past off stump, that creates the atmosphere for the release of tension when the batsmen hits a beautiful straight drive for four — or the bowler sends the off stump cartwheeling.

But if we are going to have a short form of the game, then let’s get rid of the fifty over game, which is neither one thing or the other, and so often drifts towards a result which is entirely predictable with twenty overs to go.

And incidentally, if there were ever two countries who were in need of a bit of light relief to distract them from the more dismal realities of their domestic politics, it would be Pakistan and Sri Lanka. So let’s hope for a great final.

* Kevin Pietersen has played the same number of tests, 52, as Don Bradman; Bradman scored six sixes, KP has scored 48. Bradman converted 70% of his 50s into centuries and 29% into double or triple centuries. KP has converted 53% of his 50s into 100s, which is actually pretty good, but only scored one double hundred. Admittedly, comparing anyone to Bradman is a bit harsh. But still.

» The photo, Brooding sky @ the cricket, is © Mark Elkins and used under a CC by-nc licence. I suppose it’s a bit odd to illustrate the post with a shot of the groundstaff preparing the pitch instead of the actual play, but I liked the shot.