When I opened the package and saw the cover, I thought for a moment that the bookseller had cocked up and sent me a romance novel by mistake. But they hadn’t; Masters of the Dew is that slightly curious thing, a peasant novel. Curious because, generally speaking, peasants don’t write novels — the hero of this story is illiterate, in fact — so these books are written by outsiders, for whatever reasons of their own.

Jacques Roumain was from a wealthy Haitian family, educated in Europe, a politician, ethnologist and at the time of writing this book in 1944, a diplomat. He was part of the nationalist resistance against American occupation, founded the Haitian communist party, and later founded the Bureau d’Ethnologie. I imagine that the ethnology itself was originally political, as is so often the case: a wish to celebrate an authentic local identity creates an interest in traditional peasant culture. But certainly you can see how the nationalism, the communism and the ethnology would all feed into a peasant novel. 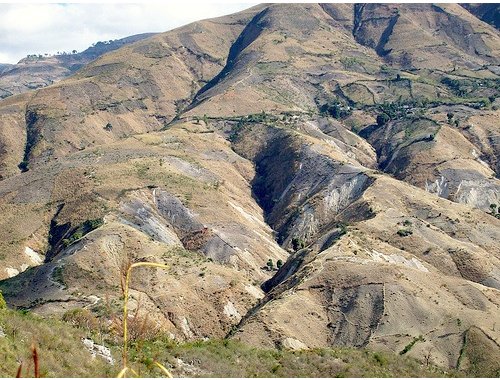 And given that background, it’s not a complete surprise that this is a novel about a strong, handsome peasant, uneducated but thoughtful and eloquent, sincere and full of integrity, who returns from working in Cuba, where he has been politically awakened by the experience of sugar-cane workers striking for better pay, and teaches the other villagers that only by working together, and putting aside their feuding, can they save their village — in this case by creating a new irrigation system.

However, the fact that the political messaging is a bit unsubtle — there’s also a corrupt local police chief and when one of the characters dies, they can’t have a church funeral because they can’t afford the fees — doesn’t make this a bad book. The descriptive passages are particularly strong and the dialogue is effective too, although apparently we are missing a certain amount in translation. In the original, Roumain apparently struck a compromise between using Haitian creole — which would have been authentic but difficult for his French-speaking readers — and putting pure French into the mouths of his peasant characters; songs and proverbs are quoted in creole and the dialogue is sprinkled with creole words. The translators, Langston Hughes and Mercer Cook, rather than trying to find suitable English equivalents or having the characters speak some kind of rural American dialect as a substitute, has them speaking standard English. I think that’s probably a solid decision, but there’s a whole layer of local flavour which is lost.

She sat next to him, leaning against the trunk of a macaw tree, her dress spread around her, and she clasped her hands around her knees.

The plain unfolded before them, surrounded by the hills. from here they could see the mingling of acacia trees, huts dispersed in the clearings, fields abandoned to the ravages of drought, and in the glare of the savanna, scattered cattle moving. Above this desolation crows on the wing hovered. Over and over they made the same circuit, perched on the cactus, and, frightened for some reason, flayed the silence with their harsh cawing.

Masters of the Dew is my book from Haiti for the Read The World challenge, and also my fourth book for the Caribbean Reading Challenge.

» The photo is ‘Degraded mountains‘, © Trees for the Future and used under a CC attribution licence. The damaging effect of deforestation comes up in the novel.

The description for that photo on Flickr says ‘The degraded mountain of Tibois (Top of Arcahaie)’; according to Wikipedia’s Arcahaie entry ‘the weather in this little quiet place is extremely pleasant and the feelings is unbelievable.’ Although I expect sooner or later some killjoy will edit it.