Paradise of the Blind is a Vietnamese novel which was apparently a bestseller in 1988 when it was originally published, in a relatively liberal moment in that country’s recent politics, but has since been banned for Duong’s unflattering portrayal of the Communist party. I’m embarrassed to admit, I had no idea that Vietnam was still a communist state. In fact, most of my associations with Vietnam are, now I think about it, drawn entirely from American war movies. So if nothing else, this book has done a little to redress that balance. 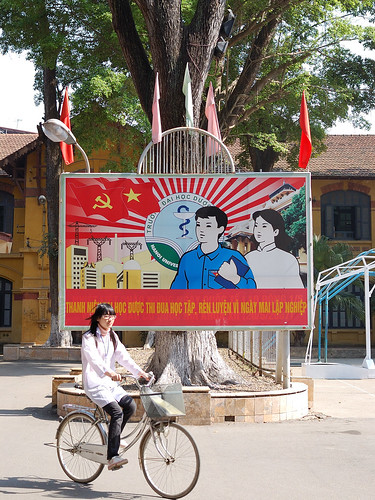 It is told mainly in flashback; Hang, a young Vietnamese woman working in a textile factory in the Soviet Union as an ‘exported worker’, is travelling across Russia on the train to visit her uncle in Moscow and remembering her childhood. Her family has been torn apart by communist land reforms, or more precisely by a feud resulting from her uncle’s behaviour as a party official during those reforms.

I’ve mentioned before that I find these novels from communist countries weirdly nostalgic. It’s not nostalgia for communism itself, which I didn’t experience. But all the imagery of communism, the breadlines, dysfunctional communal living, petty bureaucracy, the political jargon, the dangerous black market consumer goods, it all reminds me of my childhood, when the USSR was still the Great Other, and when all these images were a lively strand of popular culture.  It seems a little odd to lump communism in with Smash Hits and The Karate Kid, but that’s the way my head works.

My own quirks aside, it’s a striking and interesting novel about family relationships, and Vietnamese culture, and above all, the way that an all-consuming, inhuman political system drags down the daily lives of its citizens, and capriciously interferes with the most modest, simple human ambitions: marriage, education, livelihood.

It’s not what you’d call a cheerful book. But I would broadly recommend it.

Paradise of the Blind is my book from Vietnam for the Read The World challenge.

NB. A couple of housekeeping notes. I always feel the translators deserve a mention, even if I have nothing in particular to say about the translation, so a hat tip to Phan Huy Duong and Nina McPherson. And on the transliteration of Vietnamese names: Wikipedia renders the author’s name with a few more diacritics, as Dương Thu Hương. I decided to stick with the version used on the title page.

» The photo is © Rosino and used under a CC by-sa licence.