Redemption Road is a novel about people dealing with the aftermath of civil war in Liberia. 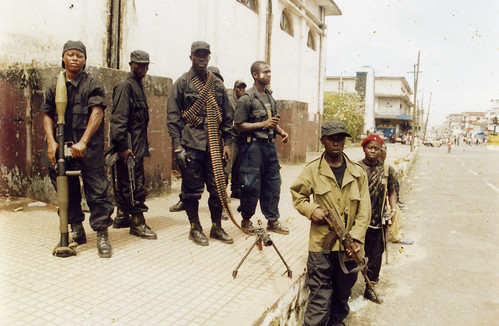 I’ll keep this fairly short because I don’t really enjoy being nasty about books, and this is unfortunately a quite badly written novel. It is full heavy-handed exposition — it has a particularly irritating way of carefully spelling everything out as though readers are a fundamentally unreliable bunch who cannot be trusted to work out anything for themselves. And it’s full of clichés; often the clichés of the romance novel or the crime thriller, which seem particularly clumsy in a book which is painstakingly working through a list of Important Social Issues.

It is so obviously well-meaning that I feel a bit guilty giving it a kicking, but this seems like a novel written as a social project rather than a work of literature.

Redemption Road is my book from Liberia for the Read The World challenge.

» The photo GOL, was uploaded to Flickr by and is © acqui_photography. He gives it this caption: ‘June 23, 2003, Monrovia, Liberia. The Government of Liberia prepares for War War II.’