Just a little plug for The First Movie, which I went to see on Friday. It’s a documentary by Mark Cousins; he visits a Kurdish village which is remote enough that none of the children have ever been to the movies, and puts on a showing of a selection of films in a makeshift outdoor cinema; then he gives the children little digital movie cameras and waits to see what footage they bring back. 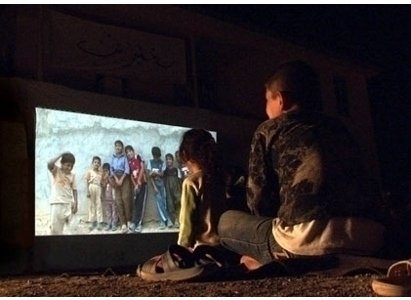 It’s a film which looks beautiful and is in turns funny and moving, with a narration provided by Cousins in a very attractive Belfast accent. As I was watching it, I was thinking that, by comparison, nearly everything you see in the cinema has incredibly little faith in the audience’s intelligence or attention. Not that this is some kind of ultra-difficult film, but it’s not afraid to be poetic, to talk about aesthetic issues, to be slow, to hold shots for a long time and let the audience look at them. I really thought it was excellent.

During October it’s on a tour of independent cinemas around the UK. I happened to see the first of these showings because it was at my local cinema. So if you’re in the UK and happen to live near the kind of cinema that might show arty documentaries, check the showing dates and give it a go. And if you’re not in the UK… I don’t know, it might appear at a film festival? Or on Netflix in due course? Well worth a look.

2 replies on “The First Movie”

Not on Netflix yet — wonder if there’s a way to make a request. The odds of this coming to our obscure little corner of the U.S. are long.