On to more cheerful subjects — I went to see the Canaletto exhibition at the NG the other day. Which i enjoyed, entirely predictably; because I’m not sure Canaletto is one of the very greatest painters in the European tradition, but he is one of the most likeable. I’ve never seen a Canaletto I wouldn’t like to own. He clearly had a bit of conveyer belt going on at one stage, producing standard views of Venice for English tourists, but even at their most formulaic, his paintings are cheerful, decorative and full of engaging details.

This exhibition puts his career in the context of other painters of Venetian view paintings at the time, which makes for interesting comparisons. For example, there are three paintings displayed alongside each other of regattas on the Grand Canal, one by Canaletto and the others by, I think, Michele Marieschi and Bernardo Bellotto. The stylistic differences are interesting, but the most striking thing is how differently they portray the physical reality of the scene; the canal is about half as wide in the Marieschi* as the Canaletto, presumably to create a livelier, more crowded scene. 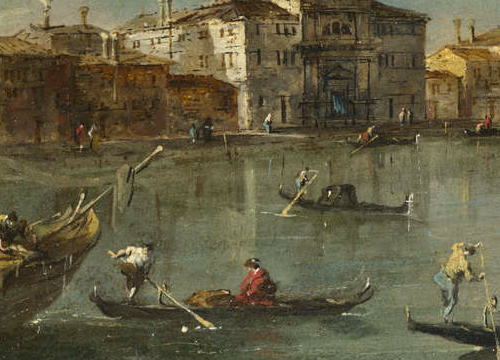 The other two most notable things, for me, were Canaletto’s early style and the works of Francesco Guardi. Canaletto’s earliest paintings of Venice were rather looser, with much broader brushstrokes; but they are also greyer and a bit grittier. They don’t have that amazing glowing Mediterranean light which is so much part of the later works, but also they make Venice look a bit shabby, a bit dirty; a city of faded glories. There’s a painting of St Mark’s square with market stalls clustered around the bottom of the basilica and campanile, and the size of the building makes the rather ragged stalls and people look paltry and insignificant, while the stalls in turn undercut the grandeur of the basilica.

I wouldn’t want to read too much into it — I daresay he was aiming for straightforward realism rather than biting social commentary — but it does make you realise how much more flattering his later paintings are. They are all glowing and sparkly, and while they do still have disreputable looking characters in them, they now look like lively local colour rather than slightly seedy. I have to say I rather liked the early paintings, but I can see why it was the later work that was so commercially successful. I don’t know whether he consciously changed his style specifically to make his work more marketable: it seems quite likely. And why not, after all.

And the Francesco Guardi paintings were interesting to me just because I was unfamiliar with his work. It’s much more stylised than Canaletto, with suggestive little brushstrokes and curious little pin-headed figures. You can see why his work was rediscovered and celebrated by C19th artists as being ahead of his time; he’s clearly moving in the direction of painters like, to make the obvious Venice comparison, Turner. Like Turner, he favoured scenes with a lot of water and sky — boats on the lagoon, rather than, or as well as, more architectural subjects.

* I think. I suppose I could try taking notes at these exhibitions if I’m going to blog about them later… nah.

» The picture is a detail from Francesco Guardi’s Venice: The Giudecca with the Zitelle.