The Cult of Beauty: The Aesthetic Movement 1860-1900. I’m tempted to sum up the exhibition as ‘The Pre-Raphaelites and their furniture’, given my recent post about how much I dislike the Pre-Raphaelites. But actually the exhibition is rather broader than than that. The Pre-Raphs do feature heavily, but it’s also the Arts and Crafts movement, Japonisme and so on; lots of Whistler, William Morris, a bit of Aubrey Beardsley, and designers like Christopher Dresser and Edward William Godwin.

And although most of this stuff is not to my taste, the V&A does this kind of exhibition superbly well. The quality of the exhibits is extremely high (I would expect nothing less), and it is always interesting to see fine art and decorative art from the same cultural moment displayed together; so often we see paintings hanging in plain, austere galleries, with no context but each other. 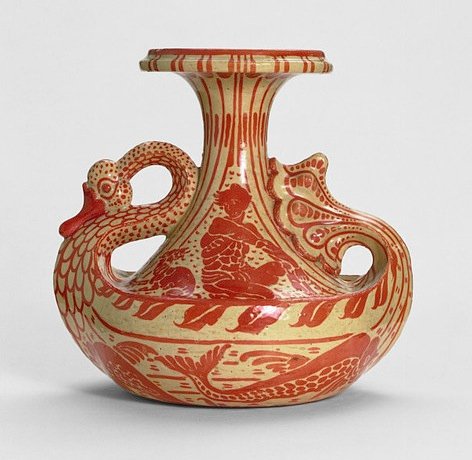 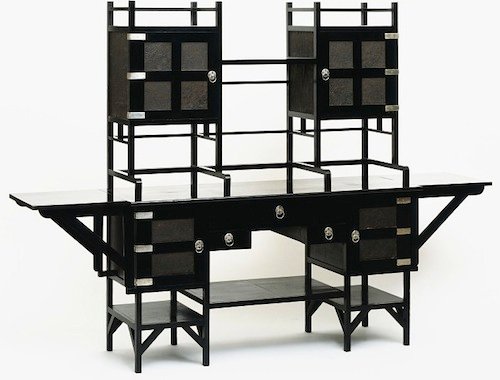 All the things that annoy me about the Pre-Raphaelites annoy me much less when it comes to furniture and ceramics and wallpaper. My problem with them, essentially, is that they are superficial: flashy, decorative, overly obvious. And the way that the paintings tend to pick other ancient or exotic cultures and reduce them to a stylistic quirk actually offers a clear parallel with the ‘Japanese’ furniture of the time. But it doesn’t bother me because after all, the decorative arts are, well, decorative. The moment you make a table which tries to do anything other than provide a stable flat surface, or a pot which does anything other than hold water, you are in the world of decoration and surface. Which isn’t intended to belittle those things: I’m fascinated by design, I love beautiful objects and I think that anyone who works to make sure that the objects around us give us pleasure is doing something very important.

But it says something about my different relationship with ‘fine art’ that I actually find Pre-Raphaelite paintings almost offensive. They irritate me in a way I can’t say I’ve often been irritated by a wardrobe or a candlestick, however ugly or ill-conceived I might think it is. I might be similarly annoyed by an object which doesn’t work properly because of bad design, but not usually by simple ugliness. What exactly that says about me… I’m not sure. 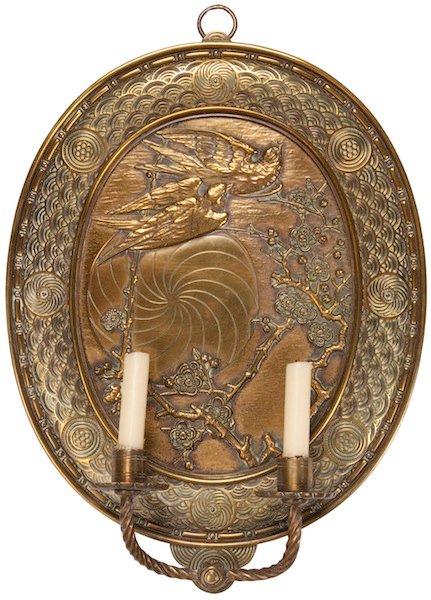 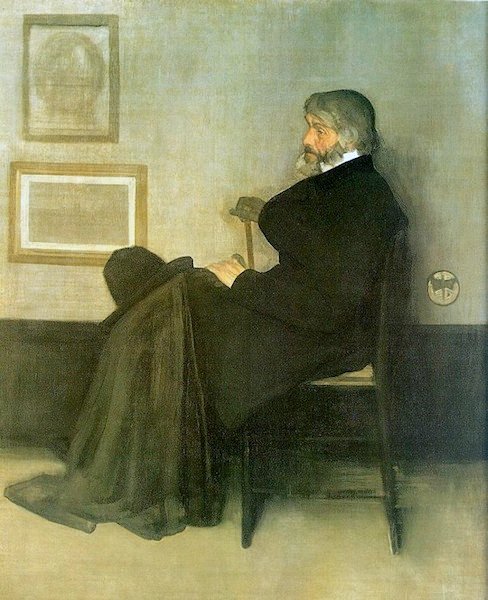 The figure who sits slightly oddly at the centre of this exhibition is Whistler. He seems stylistically apart the other artists; his paintings are exercises in understatement and control, and instead of scenes from myth and legend, he mainly paints people in houses. There’s a painting in the show (no doubt called something like Symphony in White) of a girl in a white dress. Apparently, when other people offered ingenious interpretations he insisted that, on the contrary, it was just what it looked like: a girl in a white dress standing in front of a white curtain.

So it’s tempting to see him as out of place in this exhibition, to think that really he should be over in some other gallery, maybe with the Impressionists. But clearly he is part of the same movement. There’s a room he designed for someone’s house (or at least a projection of it you can walk into) and it is full of the typical aesthetic motifs: peacocks, sunflowers, bamboo, blue and white porcelain. In his hands it’s rather lovely, I think; a lot of the interiors in the exhibition look like they would be claustrophobically busy — decorative knickknacks arranged on decorative furniture in front of elaborately patterned wallpapers and richly coloured patterned fabrics. Whistler uses the same motifs and while the result is still pretty full-on, with lots of strong colours and decoration everywhere, it is relatively cohesive and elegant. Even so, it’s hard to reconcile the richly decorative style with the simplicity of his paintings. 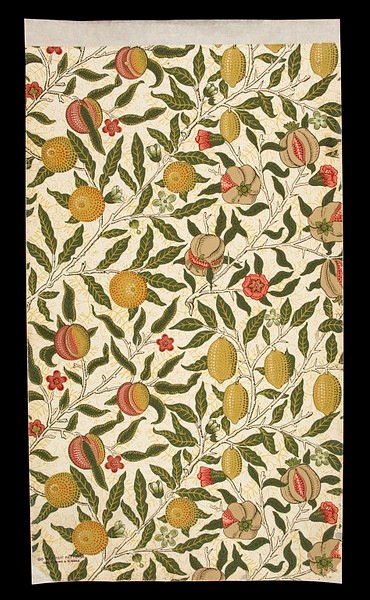 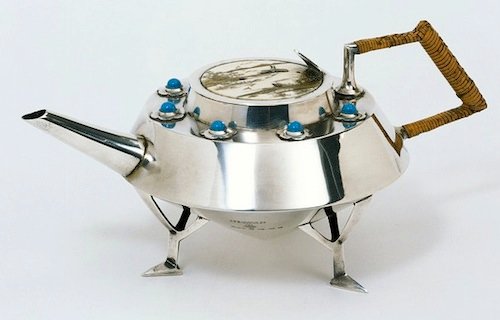 Although, having said all that, the exhibition did provide a good example of why the whole concept of ‘good taste’ should be treated with suspicion. In about the second or third room there was a group of paintings by Albert Joseph Moore. In some ways they are fairly typically Pre-Raphaelite: blank-eyed women with indistinguishable faces lounging around wearing ‘classical’ robes in a generically exotic interior. But the palette is all restrained pastels, and composition is carefully balanced and designed around a strict grid system. And I found myself thinking that’s a bit more like it, because they were more ‘tasteful’. But that seem like a pretty dismal way of thinking. To prefer the anaemic, milquetoast, decaffeinated version because it’s more restful: well, it’s not exactly going to produce art which is ambitious and interesting. 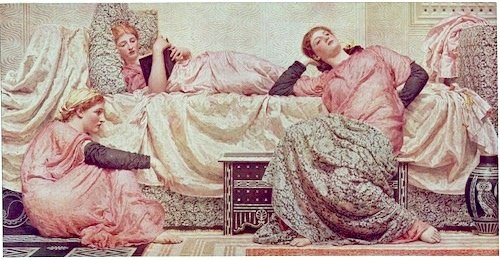 It is a fascinating conflict: I do think our lives would be hugely improved if more of the things around us showed evidence of good taste. Buildings, household appliances, packaging, signage, clothes, websites, books, posters, furniture… we are surrounded by things which are ugly or just mediocre. Which make our lives just slightly worse rather than better. But I also think that good taste is the great enemy of creativity and individuality, a stifling force that needs to be continually pushed back against. Especially since it is very difficult to separate an even somewhat objective idea of ‘good taste’ from simple social conformity.

» The vase is designed by Walter Crane, the sideboard by E.W. Godwin, the sconce by Thomas Jekyll, the wallpaper by William Morris, and the teapot by Christopher Dresser. The two paintings are Arrangement in Grey and Black, No. 2: Portrait of Thomas Carlyle by Whistler, and Reading Aloud by Albert Joseph Moore.

The Stuff of Thought by Steven Pinker