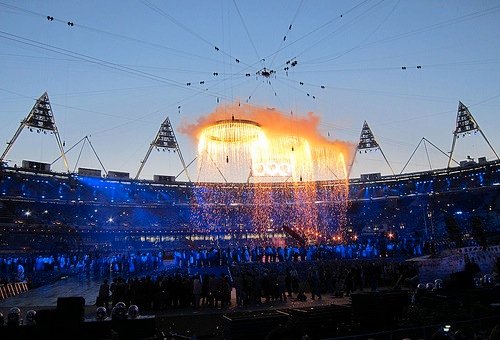 I thought it was great, and that was a pleasant surprise. We watched it with a (very savvy and worldly wise) German-American couple who enjoyed it well enough, but I liked that there were lots of references which only we really recognised; it felt like it was as much for the British themselves as to make a big impression on the rest of the world – though it was outwardly impressive too. And that includes a good measure of irony, darkness, self-doubt and self-questioning. My only real gripe, I think, was the anti-climax of wheeling out McCartney at the end!

In fact I’d really quite like to see it all again, as there was a lot of detail and quickly passed stuff that I think I missed or would like to have another look at.

Well, if you can find some technical way of fooling the BBC into thinking you are in the UK [i.e. tunnelbear or similar] you can stream the whole thing on iPlayer (that’s the version without commentary, a version with commentary also available).