… or to give him his full Ruritanian title, ‘Comte Charles de Bruc, Chargé d’Affaires de la République de St Marin à Paris, Grand Croix de l’Ordre Équestre de Saint Marin, Officier de l’Ordre des SS. Maurice et Lazare, etc.’ Although I guess even that’s not his full title, because it ends with ‘etc’. This book was translated in 1880 from the French*, which is presumably why his title isn’t given in the more obvious choices of either English or Italian. 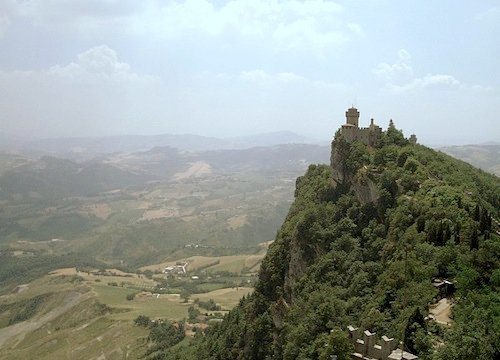 The fact that a Sammarinese diplomat should write a self-serving history of the country isn’t really a surprise;  it’s perhaps more surprising that an American writer should feel the need to translate it. I mean, it’s interesting that an independent republican city-state should survive, independent, all the way through the middle ages, the Renaissance and the unification of Italy into the modern age; but this book is not a particularly riveting account of how it happened. It doesn’t help that it tends to flatter itself; here’s an especially unsubtle example:

Their perseverance in good works, their energy in adversity, their manly love of liberty, the scrupulous loyalty with which they had kept their engagements, their immovable fidelity to their obligations, their tenacity, and their valor inspired the respect and esteem even of their enemies.

The whole book makes it sound like they managed to preserve their independence through the sheer force of their courage and virtue; presumably it was actually because they were inaccessible, strategically unimportant and just lucky.

Reading the Wikipedia article, it sounds like potentially the most interesting period of their history occurred after this book was published. The country had a fascist government from 1923, and was a single-party state from 1926, but still chose to remain neutral during WWII; then from 1945-57 they had the first elected communist government in Europe, which in turn fell in a constitutional crisis/revolution. There must be some good stories to be told about that lot.

However, I can’t be too grumpy about this book, because it was never going to be easy to find a book from San Marino for the Read The World challenge, and this was available, short, and downloaded for free from these guys. Cheap at the price.

» San Marino is © Trent Strohm and used under a CC by-nc-nd licence.