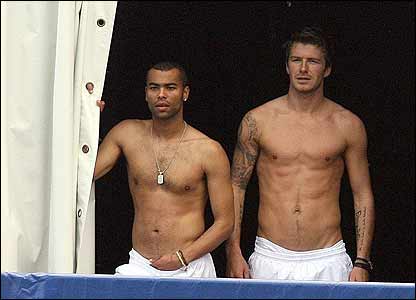 Ashley Cole, who plays at left-back for Arsenal and England, has sent his lawyer to complain to Google because at the moment, if you search for ‘Ashley Cole’, it says:

Possibly even more bizarrely, from a legal point of view, he’s suing the News of the World over a story that didn’t even name him. The NOTW claimed “two bisexual stars made some very dirty phone calls – using a mobile phone as a gay sex toy” and published a heavily-photoshopped shot supposedly of them. Some internet detective work suggests that the photo is Ashley Cole.

I have no idea whether Cole is gay, and I dont think it’s anyone else’s business anyway (he’s one of the best left-backs in the world, he’s English, it’s a World Cup year; come on people, let’s get our priorities straight). The trouble is, while I don’t think it’s important, I do rather want to know, because it’s a good piece of gossip. We have such an ambiguous relationship with the idea of celebrity privacy; I don’t actually want to cause Cole any more upset than he’s dealing with already, but I can’t resist poking around the internet for the details and repeating some of them here.

There must be a few thousand professional footballers in the UK; surely at least one or two are gay. This would be a better country if they didn’t feel they had to keep it a secret, and someone is going to have to be the first to come out since Justin Fashanu. Fashanu, though, ended up hanging himself. Even in the 8 years since that happened, I think the public’s attitude to homosexuality has probably moved on a lot, but between football crowds and the tabloid media, it would be seriously tough for anyone to have to deal with. It would be nice to think that the fans might surprise us by taking it all in their stride, but at the recent Liverpool/Manchester United match, the Liverpool fans were chanting about the Munich air disaster and the Man U fans were chanting about Hillsborough, so we’re not talking about models of sensitivity here.