Provence in May was just a great place for flowers. I claimed on Twitter to have seen nine or ten species of orchid, although it’s entirely possibly I over-claimed, since there tend to be lots of very similar species, some of them are quite variable, and I didn’t have a book with me. Still, I definitely saw an absolute minimum of six species because I saw six kinds of orchid: i.e. a bee-type orchid, a Serapias orchid, Lizard Orchid, some kind of hellebore and so on. This is a Serapias species: 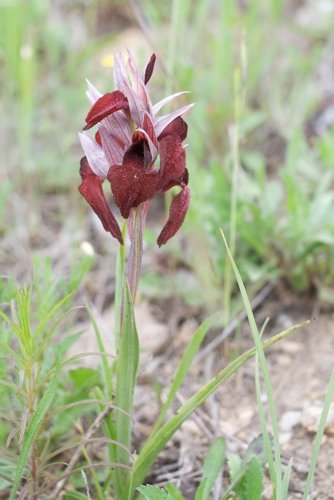 And there were lots of other flowers: various kinds of rockrose, asphodel, wild Gladiolus, broom, poppies. I love the Mediterranean in spring.

But my plant of the year is lavender. Not the fields of lavender which are such a familiar image of Provence, but the wild lavender, Lavandula stoechas, which was blooming in great swathes of purple out in the scrub: 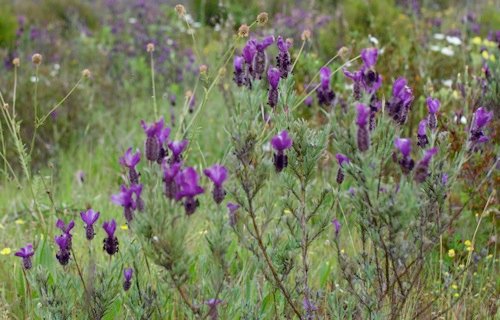 In a controversial move, the BOTY judges [i.e. me] have made the shock last-minute change to their [my] decision!

I was browsing through my pictures from Provence, looking for ones to use to illustrate this post, when I came across this shot I snapped with my phone of a weird-looking red thing: 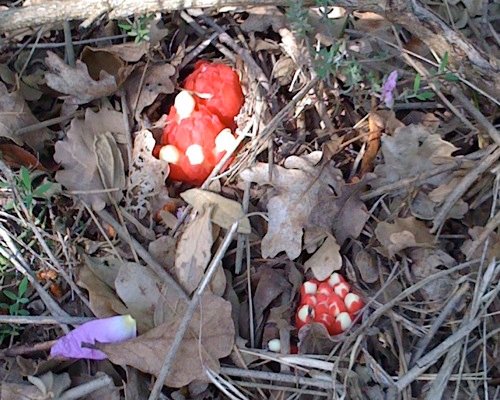 When I saw it, I thought it might be a fungus, but on closer examination it was clearly a plant. The lack of chlorophyll made me wonder if it was some kind of broomrape just emerging, but it didn’t really look right… so I snapped a picture of it and went on.

Well, when I found the photo, I decided to post it to the ID Please group on Flickr, and it turns out it is a different parasitic plant: Cytinus ruber. You can see a more fully open specimen here.

Apparently the Cytinus plant grows entirely inside the roots of Cistus plants — i.e. rockroses; the pink petals in the picture are from a Cistus — and only produces an external growth when it flowers. So it has a lifestyle normally associated with fungi.

So that’s kind of cool. But it gets better (or at least geekier). Cytinus was previously included in the same family as the famous Rafflesia, the amazing genus of plants from southeast Asia which include the largest single flower anywhere and which also live inside their host plant when not in flower.

But DNA testing has revealed that Cytinus is not closely related to Rafflesia at all; it has now been moved to the order Malvales, a large group of largely shrubby flowering plants that includes the mallows, hollyhocks, hibiscus, okra, cotton, baobab and indeed Cistus. So this plant which is so alien-looking and so highly specialised is part of a family of woody flowering shrubs; but it has changed so dramatically that only DNA testing makes it possible to discover the relationship.

So, for being both attractive and completely geektastic, Cytinus ruber is my plant of the year for 2009. Sorry Lavandula stoechas; maybe your turn will come round again another time.

I think that the hornet I saw at the Lee Valley Park deserves a mention. To give it its full name, it was the European Hornet, Vespa crabro, the largest wasp in Europe*, which I rarely see. And another good London sighting was the Summer Chafer I saw on Wandsworth Common.

And in Provence in May I saw some nice butterfly species, like Swallowtail and Scarce Swallowtail, masses of little blue ones, Red Admirals, Painted Lady, and the Southern White Admiral, which was new to me:

There was also the extraordinary Libelloides coccajus, which completely threw me for a loop when I saw it. I didn’t have most of my books with me, and I don’t know when I’ve last been so baffled by an animal. Being unable to identify an insect isn’t a surprise; they are really hard, and while I’m a reasonably competent birdwatcher, outside the class Aves I’m a complete lightweight. But to see such a large and spectacular insect and have absolutely no idea what group of insects it belonged to was startling. And cool.

And the insect spectacle of the year was the Great Painted Lady Invasion. Painted Lady butterflies were all over the place in Provence, but although there were certainly a lot of them, I didn’t think much of it; and then they started turning up in the UK in record numbers. Painted Ladies are migratory, and they make it to Britain in fairly small numbers in most years; this year they arrived in their millions. And I initially learned about it on the internet: suddenly references to Painted Ladies, sometimes thousands of Painted Ladies, started popping up in my Twitter feeds and on blogs. By the time they reached London they had spread out a bit, and I never saw more than half a dozen in the garden at once. But they were all tending to travel in the same direction, and they just kept on coming for days. I did a half-hour count on May 29th and saw 36 pass through. One a minute is infrequent enough that you could be in the garden and miss what was happening; but scale up those numbers over the whole of the country — over the whole of Northern Europe, probably — and it’s a staggering phenomenon. And all because of a particularly good thistle-growing season in Morocco the previous year, apparently. 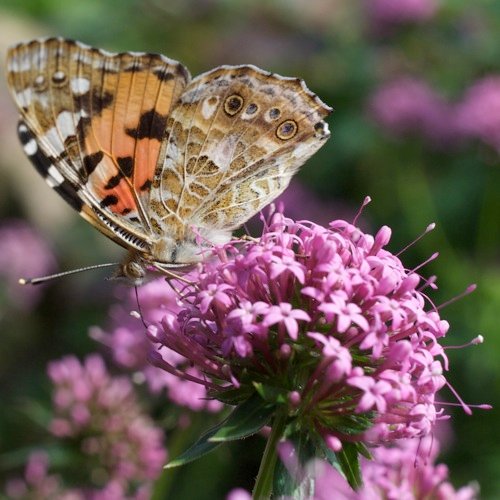 But despite stiff competition, my insect of the year was Narrow-bordered Bee Hawkmoth, Hemaris tityus, which, as you can see at that link, is a moth which looks like a bee, right down to the transparent wings. It’s something I’ve wanted to see ever since I got my first moth book, and I was thoroughly pleased to see them in Provence.

Once again, embarrassingly, despite the fact that so many of the world’s species are non-insect invertebrates, I can’t think of single particularly notable spider, scorpion, snail, squid, sea squirt or anything else which I saw in the wild this year…

…and I don’t have anything for the fish category either. Though that’s not particularly surprising because the little buggers live underwater all the time, so you don’t tend to spot them when you’re just casually out and about.

Marsh Frogs, at the London Wetland Centre, Barnes, making quacking noises that sound more a duck than most ducks do.

There’s not a lot of choice in this category, but that’s OK, I’m very happy to choose Moorish Gecko.

I love geckos, with their little buggy eyes, their flat feet, and the way they scamper around on the walls as though it was the easiest thing in the word to ignore the laws of physics.

My mammal of the year 2009 is the water vole, Arvicola amphibius. These used to be a common sight in British rivers and canals, but they’re sadly quite rare these days, so I was pleased to see one in the Lee Valley. And I’m fairly sure it actually was a water vole rather than the much commoner and much less adorable brown rat.

I love dry scrubby habitats — heathland, savannah, Mediterranean scrub — although it’s hard to explain why, exactly. So the Provençal scrub in the spring, with the wild lavender and rockrose in flower, and orchids and gladiolus, and pine and broom, and the nightingales singing, and butterflies everywhere … love it. There’s nowhere better. And it is certainly my ecosystem of the year for 2009.

Tune in again in an unspecified amount of time to discover the winner of the most prestigious award of all, Bird of the Year 2009.

* To get seriously geeky about it, and here at the BOTY awards we are unashamedly geeky about such things, it is the largest eusocial wasp; i.e. the largest of those wasps that builds a large paper nest. Which are what people normally think of as wasps. Using the term ‘wasp’ in a broader sense, the horntail/great wood-wasp Urocerus gigas is certainly larger, and I think there are even larger species of parasitic wasps in other parts of Europe.

One night a belligerent young baboon
decided he wanted to challenge the moon.
So he pointed his colourful arse at the sky
defying the moon until, bye and bye,
just as his legs were starting to ache
and his vertical bottom beginning to shake,
along came some clouds and the moon went in;
which he decided to count as a win.

Deep in the forests of Finland
where humans rarely go
are sometimes found unusual tracks
curving across the snow;

they’re rather like those of the stoat
but each is twelve inches by nine
And often nearby there’s a tuft of blue hair
caught in the bark of a pine.

If you spend a few years with the locals,
persuade them you’re discrete,
they may whisper of the iceweasels
that pad on hairy feet.

They say they live on baby elk;
cloaked by the night they creep,
and ever-so-softly snap the spines
of fawns while they’re asleep.

A buffalo can make
a quite delightful pet,
as long as you can find
an easy-going vet
who doesn’t mind an animal
that’s really very boring,
apart from the occasional
trampling and goring.

A buffalo will often make
a charming household pet,
but just in case, make sure you have
an easy-going vet
who doesn’t mind an animal
that’s really very boring
(apart from the occasional
trampling and goring).

Privately, the platypus feels
it’s only rotten luck
that people don’t refer instead
to the platypus-billed duck.