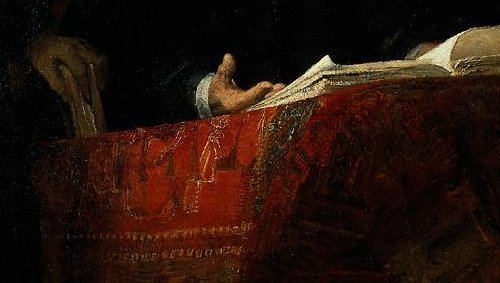 I’ve only read two books by Schama; Citizens, his book about the French Revolution, and this biography of Rembrandt. Both have been excellent. They’re also quite hard work simply because he’s so thorough. Thoroughness is no doubt a virtue in a historian, but it does make for large books. Rembrandt’s Eyes is frankly too large to read in bed, as it weighs a whopping five and a half pounds. The reason it’s so large is that it’s printed on thick glossy paper and full of beautiful reproductions of the paintings. Amazon’s price of £13 is almost worth it just for the pictures.

Self Portrait at an Early Age, from the Rijksmuseum. Click on the image to see a larger version.

I was slightly taken aback when the first chapter of a Rembrandt biography was about Rubens’ father. Schama’s obviously feels that Rembrandt can only be understood in the context of his predecessor (who was born 30 years before him), since he devotes 200 pages, nearly a third of the book, to Rubens. I actually forgot that the book was supposed to be about Rembrandt at one point. This kind of attention to context — not just artistic, but the political and religious background of the region – is perhaps unsurprising given that Schama is primarily a historian, rather than an art critic. He’s brilliant at evoking the everyday reality of life in C17th Holland, as well. There’s one tour-de-force where he introduces Amsterdam by showing the city via the five senses, one at a time. So for example, the section on smell begins:

First, the Zuider Zee itself, sucked through the inlet of the IJ, washing against the slimy double row of palings separating the inner from the outer harbor, carrying with it a load of tangled wrack and weed, worthlessly small fish, and minute crustaceans generating a briny aroma of salt, rotting wood, bilgewater, and the tide-rinsed remains of countless gristly little creatures housed within the shells of barnacles and periwinkles. In the yards behind the first row of houses facing the docks there were better things to smell. Lengths of green timber were stood on end to season, some already bent to form a rib in a ship’s hull. A man might walk down the alleys parallel to the harbor, inhale the sharp tan of fir (for masts) and oak and beech (for hulls), and for a moment think himself in a fresh-cut wood in Norway.

And on through the smells of taverns, the night-soil boats, the tanners, the plague-pits, the nosegay sellers, the bakers; and then each of the other senses in turn.

Having said that Schama is primarily a historian, I still think he does a great job writing about the paintings. That’s just as well, since it becomes apparent during the book that there is very little surviving material written by Rembrandt. There are no journals or essays, and Schama only quotes from letters once or twice. Really, the only times we get direct written contact with Rembrandt’s life is when he’s dealing with the law – buying a house, writing a will, being declared bankrupt, or indeed having his ex-mistress declared as of unsound mind.

Those things are interesting, but by themselves they give a skewed and incomplete view of someone. So Schama has to fill out the gaps though the paintings, and does it admirably. There can hardly be a more appropriate painter to do that with, since Rembrandt was an almost compulsive self-portaitist. Not only did he produce nearly 100 self portraits in different costumes and different personae, but he painted his own face into most of his history paintings as well. There was a part of me that wanted to hear Rembrandt’s voice more directly, to be able to read his words; but perhaps it’s fitting to tell an artist’s story though his art.

Self Portrait at the Age of 63, from the National Gallery.

I can’t think of anything bad to say about this book. I enjoyed reading it, and learnt a lot about Rembrandt, Rubens and the Low Countries in the C17th . Most of all, I was introduced to a lot of beautiful paintings I didn’t know before.

I recently read Mutants by Armand Marie Leroi, which is a book that uses mutation as a way of understanding the development of the body. It’s interesting but quite medical; I have a pretty high tolerance for stuff about chemical pathways, gene mutations, hormones and so on, but I still found all the polysyllabic chemical names tended to make my eyes glaze over.

Lots of interesting snippets along the way, though. For example, the chapter about growth mutations had to distinguish them from ‘normal’ variation, whether racial or environmental. Apparently, young Dutch men now have an *average* height of six foot – which makes them taller than famously genetically tall people like the Masai and the Dinka. Almost more strikingly, in Holland there is no longer any correlation between young people’s social class and their height. That is certainly not true in the UK, and I find it an incredibly impressive advertisment for Dutch social policy.