Dulwich Picture Gallery currently has an exhibition of the English painter Paul Nash, best known I guess for his work as a war artist in both world wars. I know I first encountered him at school, when we were doing Wilfred Owen or Robert Graves or someone.

This exhibition did include some of that work, but also provided a bit of context for me. It was certainly interesting to see the kind of surrealist/symbolist paintings he did, often of the English landscape, when it wasn’t wartime. But it wasn’t really to my taste; it didn’t trigger that acquisitive urge. All else being equal, I am drawn to paintings which use strong, clear colours and sharply defined forms: Vermeer, El Greco, Matisse. Provençal Van Gogh rather than Flanders Van Gogh. Paul Nash is kind of the opposite: grey-brown tones and splodgy brushwork. 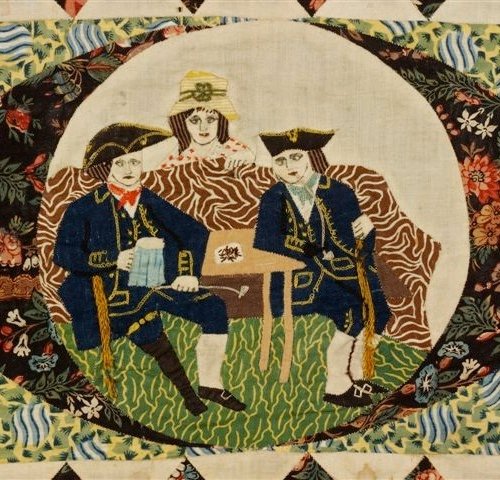 Meanwhile, the V&A has its first exhibition of British quilts, Quilts 1700-2010. I went to see it at an evening event in aid of Fine Cell Work, a charity that teaches prison inmates to do needlework as a rehabilitation exercise. There’s a quilt in the exhibition made by inmates with FCW; it is given context by a quilt made in a Japanese POW camp and one made by inmates on a prison ship who were being transported to Australia in 1841. Not surprisingly, the exhibition is keen to tease out this kind of social history from the quilts, but the other pleasure of it is just the extremely high quality of work on show. I’m fairly familiar with this stuff — my mother is a keen quilter — but they really have put together some great pieces.

The curator of the exhibition has managed to seriously annoy my mother by coming out with stuff like this in the Guardian:

Curator Sue Prichard thinks this enthusiasm is partly due to the global downturn. “I started on this project in 2004. Now there is a huge revival of interest in traditional crafts. There are a lot of women out there who are really keen to learn new skills and step away from their computer and their Blackberry.”

or in the Times:

Ms Pritchard said she hoped that the museum would inspire a revival of the craft through workshops that would teach people traditional techniques.

Because if there’s one traditional craft which didn’t need a revival, it’s quilting. That’s what appeals to me about quilting; it’s a genuinely living tradition, a vernacular art form which is thriving. It doesn’t need to be supported by government grants, it’s not the preserve of a handful of obsessive enthusiasts. Quilt shows are big business; indeed, the V&A’s exhibition is their most successful ever in terms of advance ticket sales. If there’s one criticism I have of the exhibition, it’s that it doesn’t give much sense of the liveliness of that current tradition. That gripe aside, it’s well worth visiting.

And finally Henry Moore at Tate Britain. Henry Moore was perhaps the biggest name in British art in the mid-C20th century, but he’s probably been rather out of fashion for a couple of decades, so it’s quite interesting to see this big show at the Tate.

Rather like the Paul Nash, I can’t say this particularly excited me, though it had its moments. Moore’s sculptures are often quite appealing as objects, with their curves, and the textural qualities of the materials; but it often feels like they are attractive in the same way as a weathered tree stump. Don’t get me wrong, I like a weathered tree stump as much as the next person, but I kind of feel that art could aim a bit higher than that.

The most interesting bits were probably the famous drawings of people sheltering in the Underground during the Blitz. Even though he makes the people look so much like his own sculptures, they have more impact than the sculptures themselves. They seem to hit a sweet spot between sculptural dignity and living humanity. There were some fine pictures of coal miners at work that managed the same trick.

Some of his post-War sculpture had some of the same human vulnerability and oddness, a bit of edge to it; but generally he seems to have reverted to weathered tree stump territory. Perhaps his greatest strength was a knack for producing sculptures that really worked as public art: large scale, impressive, and just about modern enough while unlikely to offend anyone.