Familiarity breeds contempt, and it’s hard to get excited about even the most attractive of birds when you see them for the 20,000th time. But there are a few birds which are dirt common but which never fail to give me a little thrill of pleasure every time I see them. Like long-tailed tits:

They are just so adorable, like little feathery lollipops. 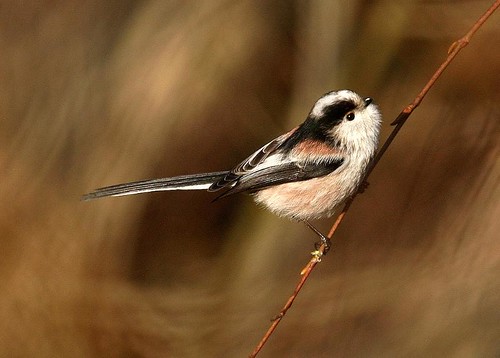 They travel around in restless groups, constantly talking to each other with little sree sree noises; outside the breeding season it’s not unusual to see groups of 25, 30, 40 birds, and you can stand in a gap between a couple of trees and see them fly over, one after another, half powder-puff and half tail, and they just keep on coming and coming. If it wasn’t for all that tail, they’d be one of the smallest birds in Europe, and they are Just So Cute. Even their nests look like something a flower fairy would live in.

Nice shots…someday I will track these cool little birds down!

Yes, they’re one of my all-time favourite birds… I can’t take any credit for the pictures, though.