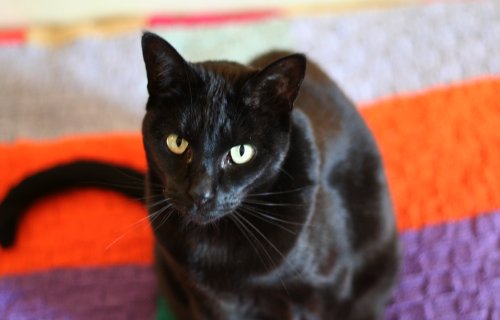 Sorry to hear it, Harry. Bleu cheese and prawns? Sounds like she led a good life.

She is beautiful, Harry. I lost my little black cat something like 25 years ago — she was a rounder affair than Posy but just as sleek — and I still miss her. My condolences.

Thanks, both of you.

Sorry to hear it.

My commiserations to you for this dreadful news.

Will there be a shrine? For my last two cat departures we had to have shrines in the living room, and I got to write a poem for each of them. Our Fritz’s ashes are still sitting on the little table tucked behind the telly.

Thanks Rik. No, no shrine.

Yeah, so am I. I keep expecting to find her in the usual places, and I walk carefully along dark corridors because she’s almost invisible in the dark. But it is what it is.

Oh, that’s sad. She sounds like a wonderful one. I’m sorry. Hugs.