I’ve been baking a ham, wrapping presents, and listening to cheesy Christmas music today, so let’s plough on with the Christmas clichés. 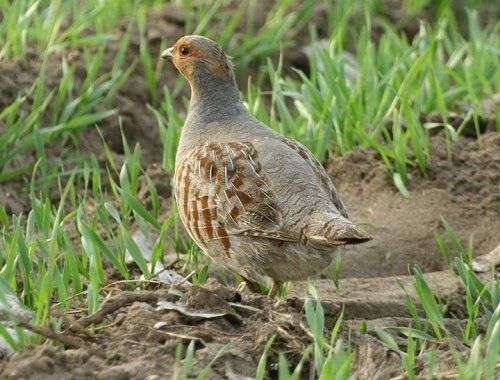 It’s not in a pear tree because, apart from anything else, it would be very unusual to see a partridge in any kind of tree.

The partridge above is the Grey Partridge, Perdix perdix, which is native to the UK, as well as much of the rest of Europe. So that’s probably the partridge in the song, although according to Wikipedia the song came from France, so perhaps it was about the Red-legged Partridge — which also came from France. The song dates to 1780 in English, and the first breeding record of RLP is 1770, so they could even have been introduced together… though probably not. People have all sorts of reasons for introducing birds to countries where they aren’t native, but not surprisingly, species which are good for hunting and eating are one popular choice.

The Red-legged Partridge is still known to hunters in the UK as the ‘French Partridge’, and even after 200 years we still think of it as an introduced species. But it’s not the only introduced game animal; the pheasant, the rabbit and the fallow deer are all so well established as to seem like native species, but the (originally Asian) pheasant was brought by the Romans, and the Normans brought us fallow deer and rabbits.

Here’s some good stuff from Wikipedia about variant versions of the song:

In the west of France the piece is known as a song, “La foi de la loi,” and is sung “avec solennite,” the sequence being: a good stuffing without bones, two breasts of veal, three joints of beef, four pigs’ trotters, five legs of mutton, six partridges with cabbage, seven spitted rabbits, eight plates of salad, nine dishes for a chapter of canons, ten full casks, eleven beautiful full-breasted maidens, and twelve musketeers with their swords.

That French version sounds like a recipe for one hell of a Christmas party.

Well, apart from the pig’s trotters, it sure does sound good, Harry – all the best to you and yours for the holiday season from across the pond.