Next up is the Leatherback Turtle, Dermochelys coriacea. 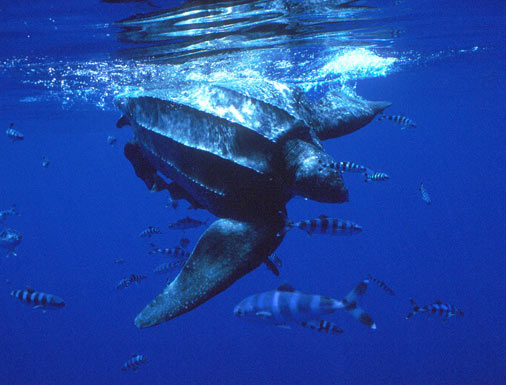 I’ve wanted to seeone of these since I saw a stuffed specimen at the Natural History Museum as a kid. I couldn’t believe how big it was. They grow to eight feet long and bulky with it. As you can see in this picture of people from the Monterey Bay National Marine Sancturay tagging a leatherback, that’s quite big:

Reptiles evolved as land animals, of course; that’s the point of having waterproof skin and laying leathery eggs. But they’ve returned to the water 16 times over the course of evolutionary history. Remarkably, although the marine turtles evolved from a tortoise-like land animal, modern tortoises are evolved from aquatic ancestors; which means they came out of the sea, went back in, then came out again.

The shells of tortoises and turtles are evolved from their ribs, rather freakily, so they’re all hollow inside:

Leatherbacks mainly eat jellyfish, which is very public-spirited of them, and so they often die after choking on plastic bags. Their distinctive appearance is due to them having lost the bony shell in favour of a thick rubbery skin stiffened with cartilage and small bits of bone (that skeleton above is some other kind of turtle). Leatherback-type turtle fossils have been found as far back as the Eocene, apparently (i.e. over 35 million years ago), but D. coriacea is the only surviving species.

Anyway, I seem to have wandered from ‘why I would like to see a leatherback’ (recap: they’re really big!) to a list of turtle-facts. So before it gets any geekier, assuming that’s even possible – finis.

Harry, this will make you a bit green – but I had a spot of serendipty come along while scuba diving among the coral formations off the island of Provodenciales in the Turks and Caicos archipelego about 10 years ago and had the rare opportunity to swim with a small leatherback, maybe 3′ in diameter. I got close enough to gently stroke its back a few times. It was a very cool encounter, second only to the time I got to swim with the dolphins. I shite you not.

Cool. I did see a turtle once while diving somewhere, but it was only a tiddler. Nice though.