This is the Ground Woodpecker, Geocolaptes olivaceus, which, as the name suggests, is a large southern African woodpecker species that lives on the ground: 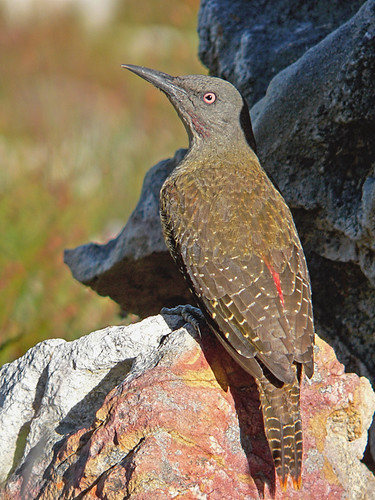 There are quite a few woodpeckers species that spend a lot of time on the ground; the Green Woodpecker in Europe, and the various flickers in the Americas, for example. But the Ground Woodpecker takes it the furthest because it doesn’t even nest in a tree; they excavate a burrow from a riverbank.

It’s an interesting example of the way that evolution works. Woodpeckers are so highly specialised for living in trees: they have two toes pointing forward and two back, to improve grip; they have a stiff tail so they can brace themselves against tree trunks; they have highly developed neck muscles to generate the power needed to chisel away wood, and their head anatomy is adapted so that their eyes and brains can withstand the enormous G-forces generated; and they have barbed tongues to fish out wood-boring insects which are so long they have to be coiled inside their heads when they are not in use.

And yet, after millions of years of evolution to produce animals superbly adapted to living in trees… some of them start hopping around in the grass instead. Presumably the long tongues are equally useful for finding ants and other insects living underground, but otherwise, all that adaption is cheerfully discarded by evolution. If you were a Creator starting from scratch to design a ground-living bird, you wouldn’t end up with a woodpecker; but they are adapted well enough to make a living, and that’s all that matters.

This isn’t a completely original observation, btw; Darwin refers to a ground-feeding South American woodpecker in the Origin, although I’m not sure which species he’s referring to: possibly the Campo Flicker.

» Ground Woodpecker is taken from Flickr; it is © Francois Dreyer.