Richmond Park laid on a feast of introduced bird species yesterday. By far the most visible were the bazillions of ring-necked parakeets screeching from every tree, but there seemed to be Mandarin ducks on every patch of water and I also saw about half-a-dozen pairs of Egyptian geese as well as the usual Canada geese. And my two best birds of the day were red kite, which is a native species but the subject of a reintroduction program using Swedish birds, and little owl, which oddly enough was introduced from Holland in the nineteenth century. 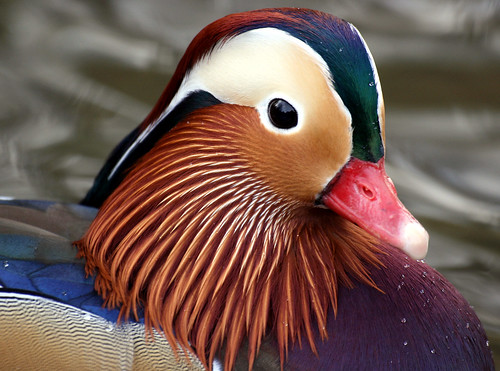 The subject of exotic species seems to provoke an unexpectedly strong reaction in some people. It reminds me a bit of the pro-songbird lobby, whose campaigns are built around a message of ‘let’s kill all the sparrowhawks/squirrels/magpies’ and who complain that the RSPB only seems to be interested in protecting the ‘nasty birds’ and not the ‘nice birds’.

Don’t get me wrong, there’s a good reason why conservationists worry about the impact of introduced species: there’s a litany of disastrous examples from the past, like rabbits and cane toads in Australia, snakes in Guam, and rats, pigs and goats on oceanic islands all over the world. And the best known British example, grey squirrels replacing the native red squirrel. But there’s something slightly creepy about the hostility which people aim at these animals which, after all, didn’t choose to come here.

There’s an obvious glib comparison to the hostility towards human immigrants, but I don’t know if it’s really very valid… perhaps there’s an emotional similarity, even if there’s not necessarily an overlap of the people involved.

» ‘Not just a pretty face‘ © Keven Law and used under a CC by-sa licence.