I know it has been nearly a year since I last did a section of the Thames Path, but I always intended to do at least one more bit, and I finally got round to it. Incidentally, here’s a trivia question for you: there are four World Heritage Sites in London, all visible from the Thames Path. What are they? Answers in a footnote.* 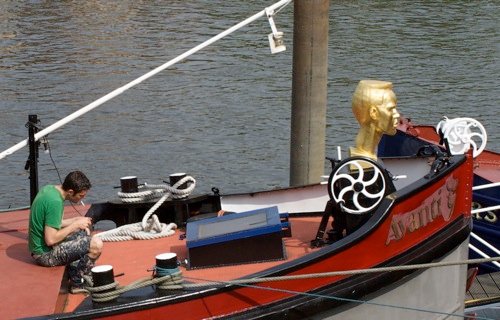 The first notable thing to be seen on this part of the walk — apart from a boat with a Grace Jones figurehead — is an island called Brentford Ait. Apparently ‘ait’ or ‘eyot’ is a word used for an island in a river, particularly the Thames. No, I didn’t know that either.

Anyway, the reason it is interesting, to me, is that it has a large heronry on it. The only heronry I knew about it London was the one in Regent’s Park. They obviously fly quite a long way looking for food, because you see herons all over London wherever there’s a patch of water, including my garden pond, but they congregate in nesting colonies and build big nests in trees. Something you can’t see very well in this rubbish picture, because the nests were too far away; I’ve cropped the picture down significantly but you still can’t see much. 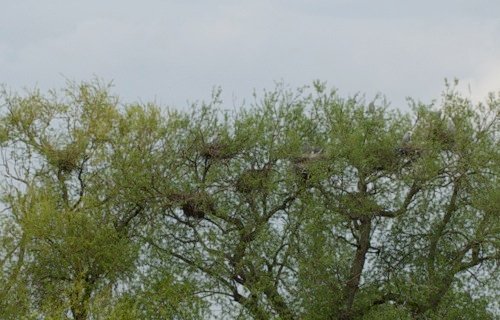 There were some more herons nesting further upriver, as well, on some small islands at Richmond.

The path then goes around the back of Kew Gardens. The path is raised up with some kind of drainage ditch on the other side from the river, so it would be quite difficult to sneak over the fence, but you can see a little bit of the gardens from the path. Meanwhile on the north bank of the river is Syon Park. So it all feels quite rural, and the flowers were out and the birds were singing — lots of wrens, particularly, when I was there — and it’s all pleasant enough, although I’d say that if you’re in that part of London and want to go for a walk: pay the entrance fee and walk in Kew Gardens itself.

This is the back of Syon House, built in the mid-C16th by the Duke of Somerset: 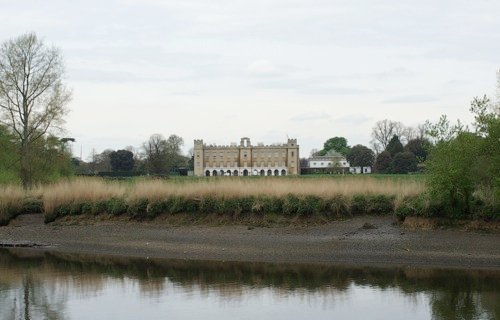 After Kew Gardens the path goes past the Royal Mid Surrey Golf Club, and over the river there’s another tree-covered island, Isleworth Ait, to help keep up the rural feel. The drainage ditch, if that’s what it is, widens out here into a respectable looking stream which seems to be quite thoughtfully managed for wildlife. By which I mean that it has been allowed to get a bit untidy and overgrown, with willow trees growing in the water, but there are clear signs of maintenance, so it’s not just neglected. I heard blackcap and willow warbler and saw a sedge warbler singing in the undergrowth, so that was quite encouraging — although at this time of the year they may just be passing through on their way to somewhere else. There were also quite a lot of butterflies, particularly one of my favourites, the orange tip. 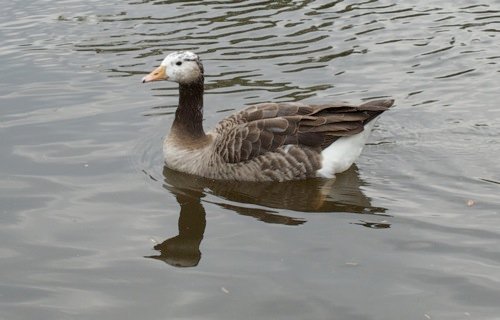 The next stage really is Richmond, with more herons, lots of generally expensive looking people and some places to stop for lunch. And what might be a Canada Goose × Bar-headed Goose hybrid. It was with a group of Canada Geese and one Bar-headed Goose, so it’s I think it’s a reasonable guess. Neither species is native here, and they don’t occur wild together — the Bar-headed Goose is from Central Asia and the Canada Goose from North America — but waterfowl hybridise fairly freely.

EDIT: the nice people at the Flickr Hybrid birds group seem to think it might be Canada Goose × Greylag/domestic goose.

Anyway after Richmond, it’s more of the same — leafy towpath — until Teddington Lock where I crossed the footbridge and caught a train at Teddington. Pleasant enough but not very interesting. Although Teddington Lock was where the Monty Python fish-slapping dance was filmed, which is kind of mildly neat.

Incidentally, at Teddington I had a little lesson in why it might not be a good idea to rely too heavily on Google Maps. This is my iPhone’s advice on the best route to the station from where I was on the other side of the river: 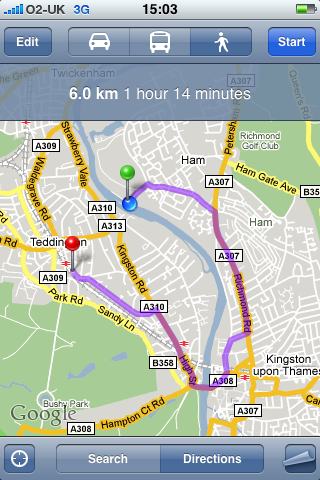 Which would seem pretty reasonable if I wasn’t standing right next to a footbridge at the time. Don’t get me wrong, it’s brilliant having magical maps in your pocket the whole time; I’m just glad I consulted the A-Z before leaving the house.

» You can see more of my photos from this section of the walk on Flickr. You can even see them on a map although some of the locations are approximate.

* Those World Heritage Sites are, in the order you pass them walking upstream:

All very fair choices, I think. The most obvious gap in the list would be St Paul’s Cathedral, I guess. Or since they don’t mind lumping a few buildings together to make one WHS, how about ‘St Paul’s Cathedral and the city churches’ to take in all those Wren and Hawksmoor churches built after the Great Fire. Buckingham Palace is an obvious possibility, perhaps, except that I don’t think anyone claims that it’s particularly architecturally interesting.