I got some very nice new binoculars at Christmas, so various people have asked to try them; and it appears that if you give a pair of binoculars to someone who doesn’t use them much, the first thing they do is point them at the furthest object they can find. Or they ask ‘How far can you see with those things?’ 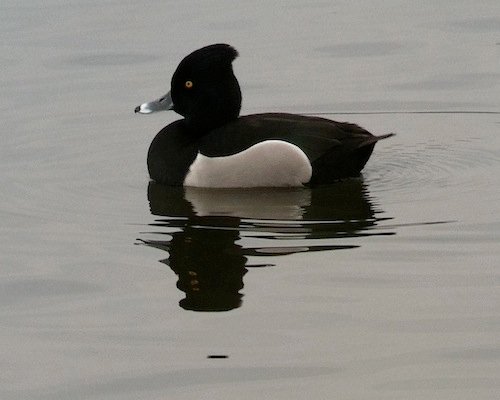 Which is actually rather a bad way of testing them. Because if the visibility isn’t perfect — if there is any dust, or heat haze, or mist, or if it’s just a bit gloomy — you rapidly run up against the limitations of physics. It doesn’t matter how brilliant the lenses are, they aren’t going to magically make fog disappear.

If I was more spiritually inclined, I’d be tempted to make a metaphor out of that — it’s not about seeing further than the other guy, it’s about seeing the things which are close to you more clearly — but I’m not, so I won’t.

» The photo was taken with my phone camera and the new binoculars. It doesn’t have much relevance other than that. I just like to have a picture to break up the rather austere design of the blog.

Simon Barnes has a great comment about binoculars – when asked to recommend some for first time birdwatchers, he says “any”. IMO, how far is less interesting than how close. I really love my “extremely close focussing” Pentax, which have a range of < half a metre.

Yes, close focussing is brilliant, for butterflies and flowers especially. Mine don’t go quite as close as that; I can’t quite focus on my own feet, but I’m not a tall man. So maybe six feet? Which usually good enough.

I never thought of using my phone + binoculars as an improvised zoom camera. Your picture came out quite well. I have to try this next time!