Well, not actual summer, obviously. But it has been a week of glorious spring sunshine here, and I’ve been out and about enjoying it and doing some birding.

On Monday I  failed yet again to see Lesser-spotted Woodpecker in Richmond Park *shakes fist in general direction of south-west London*, but that was more than made up for by two birds. One was a woodcock — a sign that winter hasn’t quite left us yet, because they certainly don’t breed in Richmond. It was the classic brief view of it appearing from the leaf litter, flying a short distance and disappearing again, but it was a lifer for me so yay. 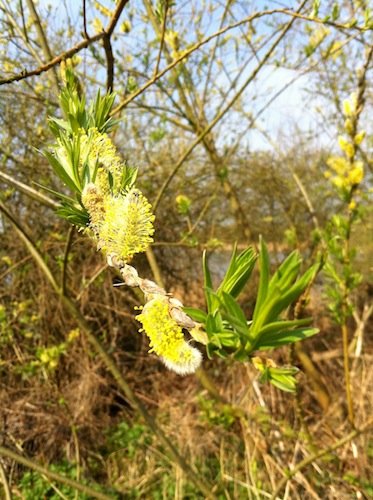 The other was the duck I used to illustrate my last post. I took the picture because it was an obviously odd-looking Tufted Duck, presumably a hybrid but I wasn’t sure quite what; turns out to be Tufted Duck × Ring-necked Duck. Which is cool, because Ring-necked Duck is an American species and a bit of a rarity in Europe, while Tufted is a European species and occasional visitor to North America… but like an anatine Romeo and Juliet, one pair obviously overcame the obstacles. If, that is, the parents were wild birds. I saw a black swan yesterday, and I’m quite certain that it didn’t fly here all the way from Australia. Not to mention the Mandarin Ducks, Egyptian Geese and Ring-necked Parakeets that breed in Richmond Park.

Still, it was an interesting bird. And the first time in a while, incidentally, that I regretted not having a paper field guide with me as well as the iPhone one, but fortunately the photos I took were good enough to let me work it out later.

And yesterday I had a good day up in the Lee Valley. I kind of hoped I might see a migrating Osprey, which didn’t work out. But I saw about eight species of duck, including Goldeneye, had a good view of a Water Rail, and the Chiffchaffs and Cetti’s Warblers were singing. And I saw my first Sand Martin of the year (that’s Bank Swallow if you’re American), and the best bird was a Pink-footed Goose in among the greylags.

And lastly, on Wednesday I went for a walk with a friend on the South Downs, and the skylarks and meadow pipits were singing, which was nice, but the most surprising thing was to suddenly hear a distinctive groonk groonk — raven!

I still think of ravens as birds of the really wild places; Welsh mountain tops, Scottish moors. Which they were, when I started birding twenty years ago. But actually they’re one of the most adaptable species in the world, living everywhere from deserts to the high Arctic. The fact that, when I was a child, you didn’t see them circling high over rolling farmland in southern England: that was a historical accident. It was the result of them being wiped out by gamekeepers and farmers. And now they are protected, they are coming back; like the buzzards, the peregrines, the sparrowhawks. And they are a joy to see.

3 replies on “Sumer is icumen in”

Good point about ravens — the very same thing was true historically in Pennsylvania, and doubtless throughout the East.

Apparently they nested in central London as recently as the 1850s — which I suppose isn’t that recent, but London was probably the largest city in the world at the time. And of course they’re famously associated with the Tower of London. Although there probably isn’t as much carrion around in town for them to scavenge any more. Particularly since we got rid of the gibbets and stopped putting people’s heads on spikes. Although I guess they could adapt to eating discarded kebabs.