Among the species I’d seen before, highlights included Montagu’s Harrier, which is an elegant, long-winged bird of prey that I had wonderful views of; Southern Grey Shrike, which I’d seen before in Morocco and Spain, but certainly never so well; Black Stork, a species I last saw over twenty years ago on the day I did a bungee jump at Victoria Falls; Pallid Swift, because I had previously ticked it on the basis of a somewhat dodgy sighting, so a really good sighting was a weight off my mind (and also because it was picturesque to see them nesting on cliffs overhanging the sea). Bonelli’s Eagle and Golden Eagle are certainly worth mentioning as well, although neither were particularly good views.

One of the particular attractions of the trip I took was the unusual cliff-nesting storks. These are White Storks, the ones better-known for nesting on chimneys (and bringing babies). Along this particular bit of the Portuguese coast they’ve developed the habit of nesting on rocks just offshore. I think there are probably at least ten or eleven nests in this picture, although admittedly you may have to take my word for it: 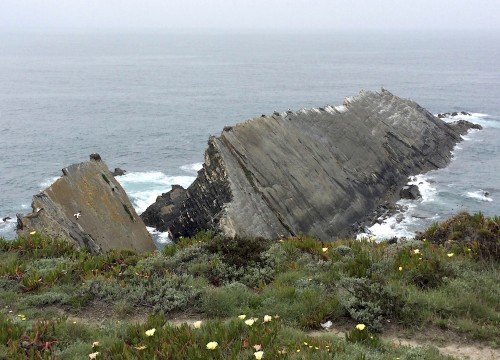 You should at least be able to make out the streaks of guano, and the flying white bird with black wingtips in front of the left-hand rock. Here’s a photo, taken through binoculars, of a nest which was unusually close to the cliff: 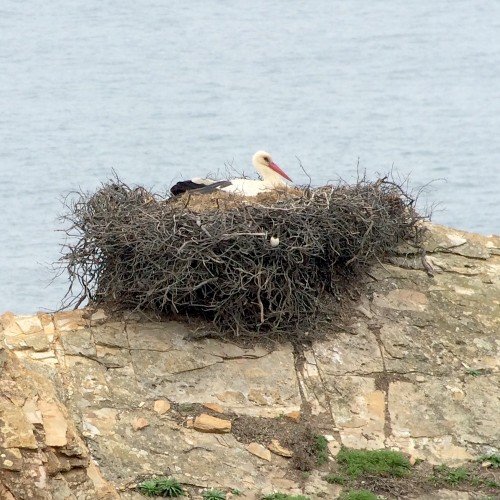 Of the eight species I saw which were new, the least interesting was Iberian Chiffchaff: a bird which is effectively identical to the (very common, small, drab) Common Chiffchaff, but with a different song. I didn’t even definitely see one — I saw chiffchaffs that weren’t calling and heard Iberian Chiffchaff singing — but I’m ticking it on the song.

Then there was Western Bonelli’s Warbler, another little greenish bird in the same genus as the chiffchaffs. I have to say, it was a much more attractive bird in person than you would think looking at illustrations; but that’s not saying much.

Black Vulture (or Cinereous Vulture, if you want to avoid confusion with the New World species) is a cracking species — the largest bird of prey apart from the condors, with a wingspan from eight to ten feet — but again, not particularly good views. Spanish Imperial Eagle (or as my Portuguese guide tried to persuade me it was called, Iberian Imperial Eagle) is a majestic species which used to be the rarest eagle in world until good conservation work managed to upgrade it to the second rarest*; there were estimated to be 324 breeding pairs in 2012. Again, though, very distant views.

I also saw some Black-bellied Sandgrouse — the sandgrouse are ground-living desert pigeons, sort of — which was the first sandgrouse I’ve seen in Europe. And quite good views of a pair of Stone Curlew, which is a magnificent, goggle-eyed bird.

But when I booked a birding guide for a day, there were three species I particularly wanted to see: Little Bustard, Great Bustard and European Roller.

The roller is a truly spectacular species, a big electric blue bird the size of a crow with deep, royal blue patches on the wings when it flies. We spent a while watching them, and it would almost certainly be my bird of the year if it hadn’t been my winner for BOTY 2007.

Little Bustard is also a great species, and we saw them reasonably well; but my Bird of the Year 2014 has to be Great Bustard. I believe the world’s heaviest recorded flying bird was a Great Bustard; with the slight caveat that the particular individual may have been too fat to fly. On average it’s the second-heaviest, after Kori Bustard, and it’s a big beast of a thing. Here’s the distant, hazy photo I posted for BOTY:BPiaSR: 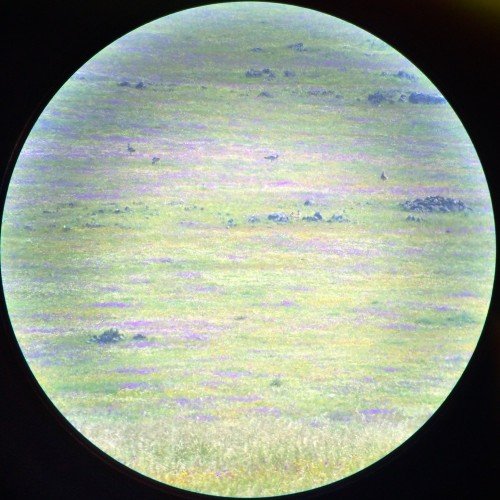 Here it is zoomed into the centre a bit, clearly showing five birds:

The two in the middle [enhance! enhance!]: 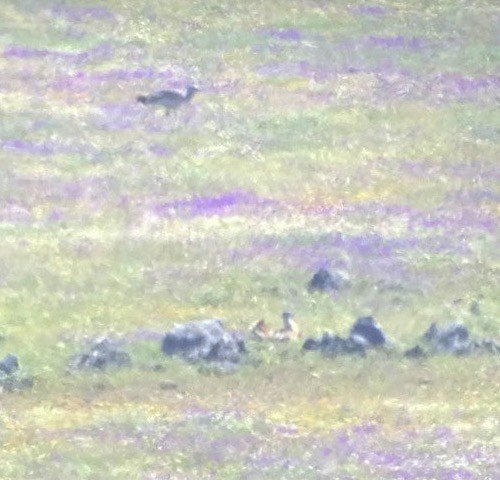 But what’s so good about bustards is what they do to attract a mate. Stick with this video for at least a couple of minutes to get the full effect:

Amazing. I didn’t get views like that, sadly, but I did see them a bit closer than in my photos, and I did see them displaying, and they are brilliant birds.

*The massive, monkey-eating Philippine Eagle is now the rarest.

Keen followers of the Bird of the Year Awards will notice a change in the categories this year. Butterflies and moths receive a disproportionate amount of my insecty attention, so I think it makes sense to split them out into their own category. Realistically, I could just split all invertebrates into ‘butterflies and moths’ and ‘other’, but I think it’s good to sit back at the end of the year and try to think of an interesting spider or slug or sea urchin or something.

I went on a lovely holiday in Portugal in the spring, and I mainly chose the timing for the flowers. Everyone goes to the Mediterranean at the wrong time of year. It may not be as hot at the end of April as it is in August, but the whole countryside is full of flowers and birdsong. 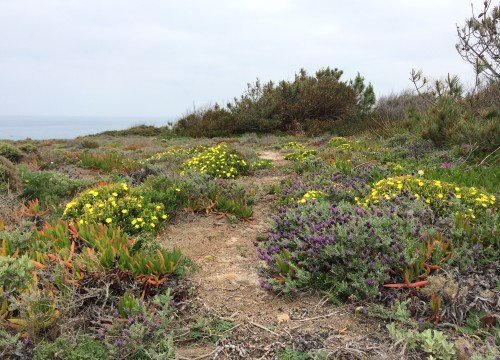 So I was walking along the Atlantic coast of Portugal, and the cliffs were covered in drifts of rockroses — pale yellow, strong yellow, white, pink — but there was also French lavender, thrift, big Spanish broom, little compact mounds of broom with pale yellow flowers, maybe eight or nine different orchids, wild gladioli, amazing vivid blue pimpernels. And sometimes I’d put my backpack down and get a great waft of wild thyme. 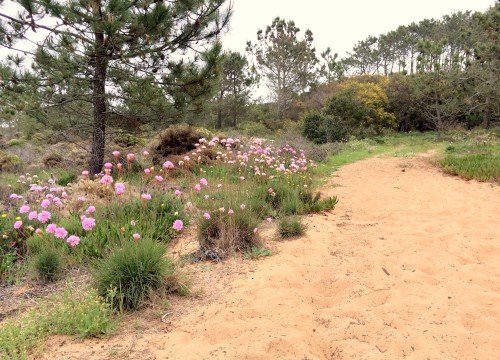 But I have to pick one. Among the various orchids, I was pleased to find these plants of a tongue orchid which is normally burgundy red: 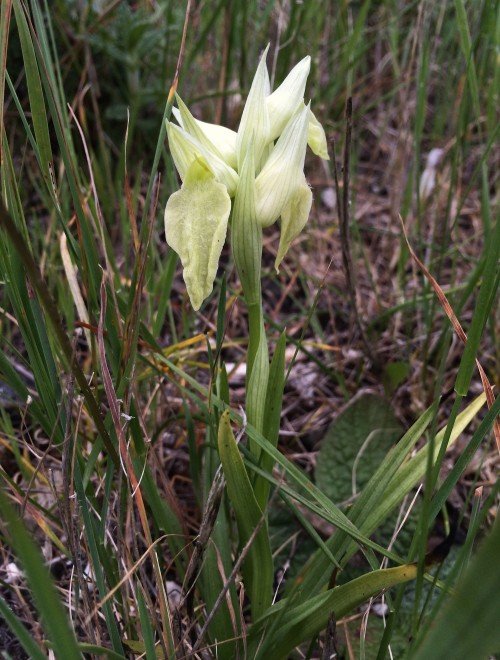 But perhaps perversely, I’m not going to pick a flower; my plant of the year is the cork oak: 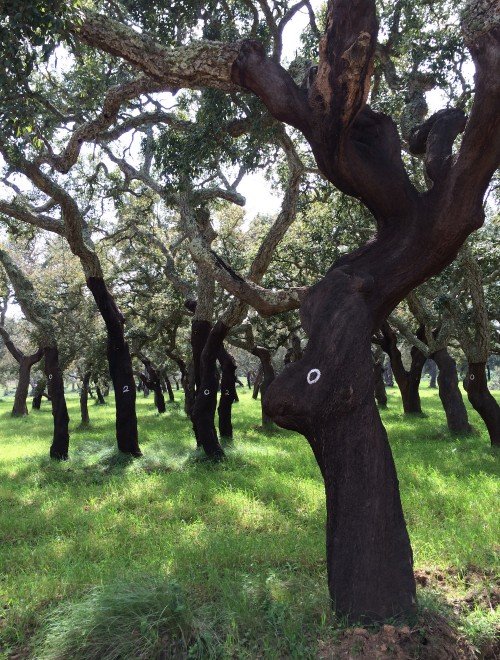 The numbers on the bark are to keep track of when each tree’s bark was last harvested. The combination of the dark naked trunks and greyish bark sleeves is rather charming, I think.

I made an effort to tick off a few more British butterfly species this year, and had four life firsts. But they were very much butterflies for the connoisseur; by which I mean they look… unspectacular. The names give you some idea: Essex Skipper, Small Blue, Grizzled Skipper, Dingy Skipper. The Small Blue is indeed remarkably small, but it’s not very blue; the Essex Skipper is distinguished from the Small Skipper by the colour of the undersides of the antennae; and the other two skippers are grizzled and dingy.

I also saw  green hairstreak for the first time in Britain, which is a genuinely pretty butterfly, with iridescent green underwings; but I have seen them before in France. And a few attractive moths, like Clouded Buff, and this Buff Ermine, seen here on the classic habitat of a railway station toilet door: 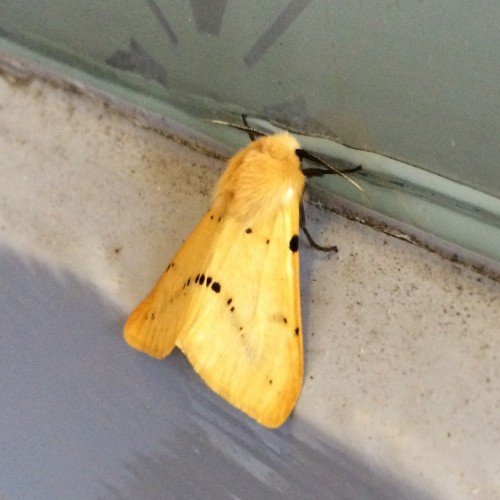 But the winner is again from Portugal, a kind of butterfly I have wanted to see for years because it’s an exotic-looking European species not found in the UK: a Festoon. To be exact, this is a Spanish Festoon: 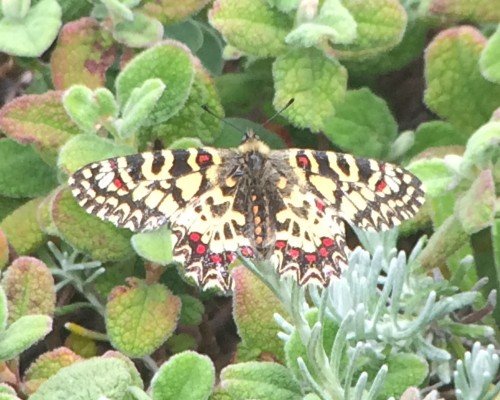 It’s rather a worn specimen, and it’s a terrible picture taken with my phone through my binoculars, but it’s my butterfly of the year.

The most exciting non-lepidopteran insects I saw this year in the UK were ruby-tailed wasp (so shiny!) and velvet ant (actually a furry wingless wasp, dontcha know). Although the most photogenic might be this dor beetle: 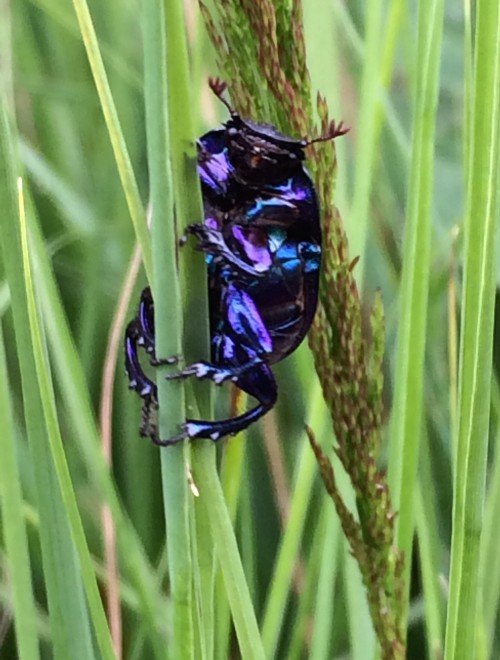 But I also saw some good beetles in Portugal, like this spotty hairy chafer which I think is probably Oxythyrea funesta (but usually when I think I’ve identified an insect and I consult an entomologist, they tell me I would need to check its genitalia under a microscope to be sure): 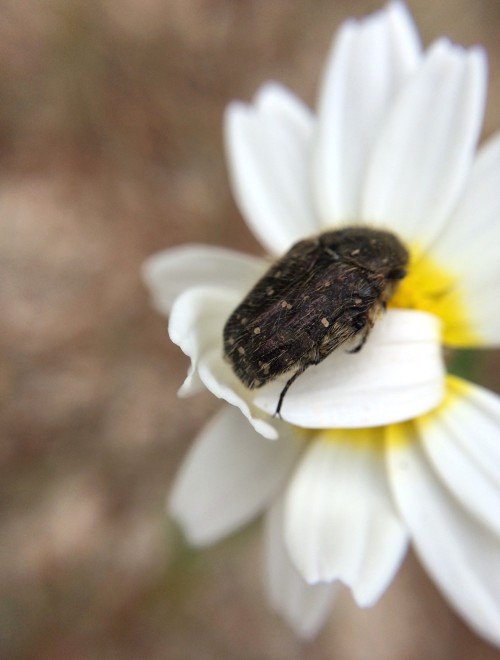 And there was this grotesque mammoth which, I learned later, is an oil beetle: 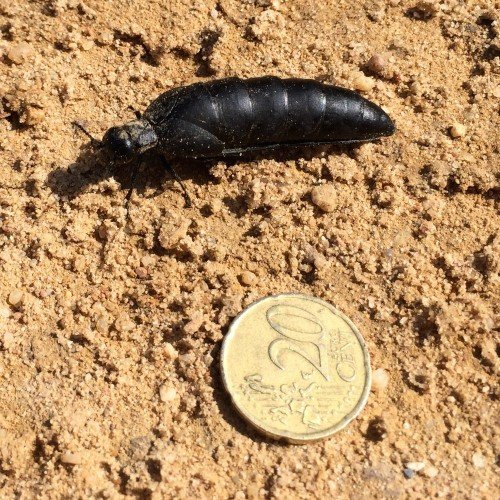 But I’m going for this spiky beetle as my best insect (other) for 2014. According to the coleopterist I consulted on Twitter, it’s probably Sepidium bidentatum: 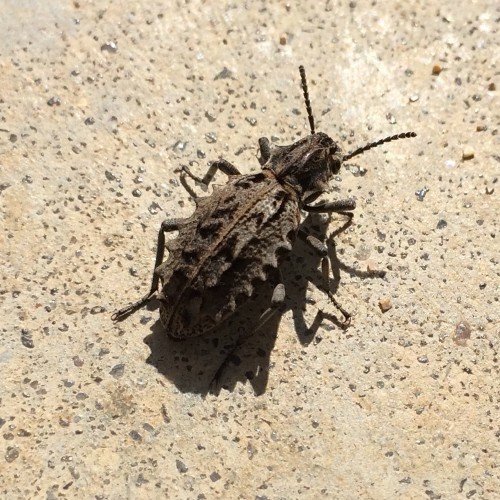 So I was walking along in Portugal and thought oh, what’s that pink flower the bumblebee is feeding on… 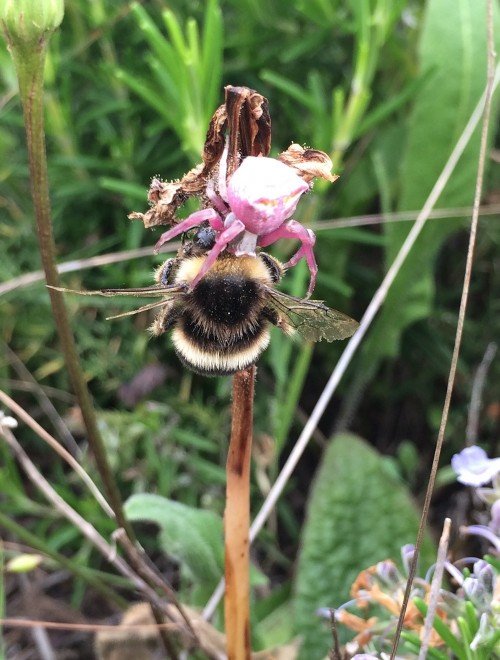 As it turns out, the bumblebee was not the one doing the feeding. That is a pink crab spider, possibly Thomisus onustus.

But my invertebrate of the year is the wasp spider Argiope bruennichi. These have been spreading rapidly across the south of England in the last ten years, helped by a combination of global warming and, I learn from Google, new-found genetic diversity after global warming allowed previously isolated populations to interbreed. It may be a sign of the coming apocalypse, but it’s a handsome beastie which I’ve been trying to see for a couple of years: 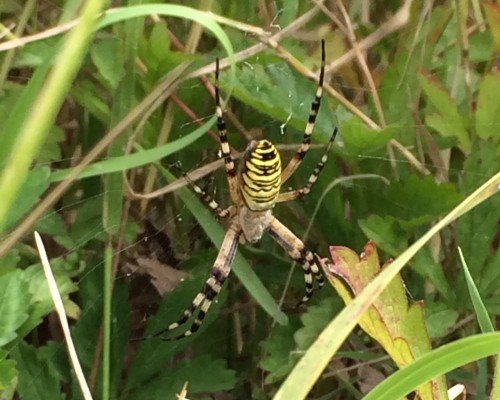 I saw a grass snake trying to eat a frog in the woods at Bookham Common. I did take a couple of pictures of snake belly in thick grass, but they’re not worth sharing.

No, I’ve got nothing.

I’ve seen the usual common frogs and toads — lots of tadpoles in the pond this year — but nothing notable.

An Egyptian Mongoose in Portugal. I just googled this to check, and apparently it was always assumed that these were an introduced species in Iberia — because of a lack of fossil evidence and the distance from the nearest wild African populations — but there are fossils in North Africa, and recent genetic testing suggests the Iberian mongooses are the descendants of some of those North African animals that presumably crossed over at Gibraltar in the Pleistocene, when there was no sea there.

Either way, it was a neat surprise; I didn’t know they were there.

Obviously the Portuguese cliff-tops were great, the pine scrub was a delight, but my choice is the steppes of Alentejo, where I went with a hired bird guide for a great days birdwatching. I imagine in summer they are baked dry, but when I was there it was gently rolling green fields with flowers forming great hazy patches of colour. I only took a couple of pictures and they don’t do it justice, but here’s one I took through a telescope, admittedly with the saturation punched up a bit, that gives you some idea.

There are actually some birds in that picture, which is why I took it; but they can wait for the main Bird of the Year 2014 post.

I’ve only ticked off nine new countries in the last twelve months. This means that the finish-line has receded even further into the future, but hey-ho.

I got 19 species this year, which equals my previous best.

It’s the first time I’ve seen redwing during the count; on the other hand no goldfinch(!) or goldcrest, wren, siskin, starling.