2006 was a pretty good birding year for me, mainly because of my trip to Andalusia at Easter and Galapagos/Ecuador in the autumn. But I did get one lifer in Britain this year, which for a rather occasional, fair weather birder like me was very exciting. That was Horned Grebe (what used to be called Slavonian Grebe), which I saw in the sea off Hampshire when I was visiting my sister last month. But a winter-plumage grebe some way out to sea isn’t going to be my bird of the year, nice though it was (and the grebes are a great family of birds).

The new birds I saw in Spain were particularly exciting because I’ve been using European bird guides for 20 years now, and the birds in the guide which are not found in the UK have a particular glamour for me. However gorgeous the bird, if you’ve never heard of it before you see it, it’s not as exciting as something you’ve wanted to see for decades. 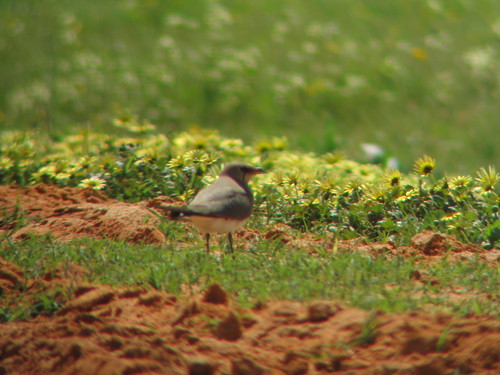 It’s one of those appealing animals that has rather obviously evolved away from the standard model of its ancestors into a different niche. As I said about this photo on Flickr, “Runs like a plover, flies like a tern.” Pratincoles are waders, like plovers and sandpipers, but at some point in their evolutionary history they took to catching insects on the wing. Perched they look like rather stretched plovers; in flight their long, pointed wings and agile flight make them look like terns or swallows.

Azure-winged Magpie is just a beautiful bird. Like most crows, they have a bit of personality, but it’s those incredible blue wings and tail that make them special. And Royal Tern is a rarity; a basically new world species that also breeds on the Atlantic coast of Africa (Mauritania, I think, but don’t quote me on it) and occasionally turns up on the south coast of Spain, where I saw it. So that was cool.

The Galapagos was full of good stuff, of course. The total list wasn’t that huge (53), but there were some classy birds on it. 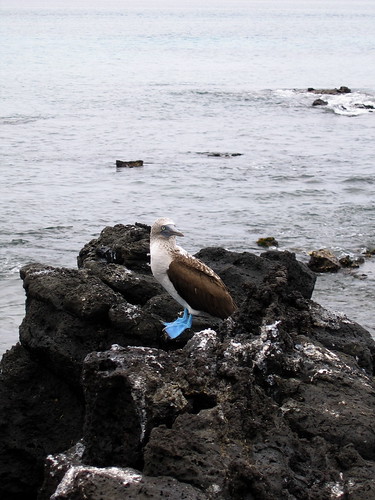 Some species worthy of note:

Everyone’s favourite Galapagos bird, the Blue-footed Booby. It has blue feet! And a silly name! Flightless Cormorant – for me, the name says it all. Woodpecker Finch – the least finch-like of the ‘Darwin finches’, and so the most striking example of adaptive radiation. Swallow-tailed Gull- the world’s only nocturnal gull. And frigatebirds, which I’ve seen a few times before but are just one of my favourite families of birds.

It was also just a pleasure to be at sea for a week and be able to watch real marine species, the kind that only come to land to breed: shearwaters, petrels and storm petrels. I’ve seen other shearwater species a few times before, and they’re great things. They ride the air currents just above the waves, whipping along stiff-winged with one wing-tip practically touching the water surface and occasionally swivelling from one side to the other. But to see storm petrels was one of various lifetime ambitions fulfilled on that trip (I have a lot of wildlife-related lifetime ambitions, so I’m not going to run out anytime soon), and they weren’t a disappointment. Whereas shearwaters seem perfectly suited to the rigours of the open ocean — all wing, seeming to travel effortlessly with just the tiniest movements — storm petrels are delicate little fluttery birds. The Japanese call them umi-tsubame: sea swallows. Their cutest habit is ‘walking’ on the water – flying just above the sea with their feet pattering on the surface whille they look for food. I could happily watch them for hours.

And so to Ecuador. Birding in the tropics is just extraordinary: the sheer number of species makes it quite unlike birding up here in the north. And so many of them are colourful (parrots, toucans, hummingbirds, trogons, quetzals, tanagers) or just excitingly different (woodcreepers, spinetails, antbirds, antpittas, tapaculos). The birds that stand out in memory include Chestnut-crowned Antpitta, Yellow-rumped Cacique, Long-billed Woodcreeper, Grass-green Tanager, Streaked Tuftedcheek, Plate-billed Mountain-Toucan, and perhaps the cutest bird in the whole world, the Booted Racket-tail.

But for my bird of year, we’re going back to the Galapagos and the Waved Albatross: 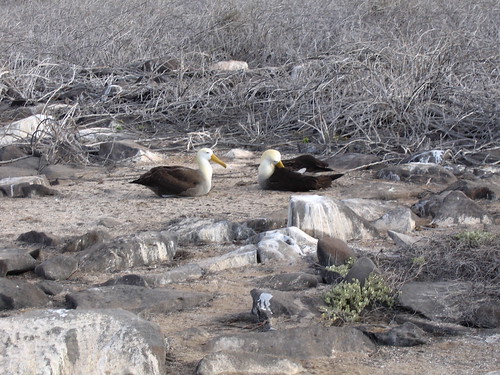 To see albatross was another lifetime ambition. They are the epitome of wildness; breeding on remote rocky islands in the southern oceans and spending most of their time out at sea. And they’re big; Waved isn’t the biggest species, but it still has a 7′ 7″ wingspan. When one of those flies low overhead, as they did when we were on the island where they breed, it’s a special moment. It was great to see them on land and get a really good view of them, and particularly to see them ‘dancing’: the pair mirrors each other movements and go through a whole repertoire of posing, beak-rattling, throwing their heads back, leaning one way and the other. But for me it was especially satisfying that I saw my first one at sea. We were out on deck looking for whales and the albatross went past quite unexpectedly — it was the opposite end of the archipelago from where they breed — and as soon as I was sure I screamed ‘Albatross! Albatross!’; largely, it has to be said, to the bemusement of all the non-birders around me. That moment, when you suddenly see a bird you really want, is such a rush. I’m sure it taps into millions of years of our ancestors’ hunting instincts. But I’m not picking Waved Albatross as my bird of the year just because it gave me an adrenaline hit. It was a special bird.