The Thames Path is what it sounds like: a walking route that follows the Thames. It runs 184 miles from the source in the Cotswolds to the Thames flood barrier. I walked from the Thames barrier to Greenwich. My plan is to do the London part of the route in occasional sections; I’m not planning to walk all the way to Cirencester. Though it might be quite an interesting long-term project. 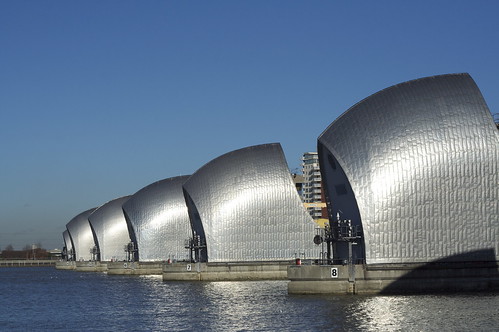 The section I’ve just done started at the Thames Barrier itself and went along the south bank, looping around the Greenwich peninsula past the Millennium Dome, with all the skyscrapers of Canary Wharf just over the river, and ended by going past the Royal Naval Hospital.

Despite the engineering marvels of the barrier and the dome and the shiny pointiness of Canary Wharf, it really was not a glamorous walk. The shipping which once would have made that stretch of river one of the busiest in the world now goes into more modern, deeper ports that are equipped to deal with container ships, and heavy industries have largely moved overseas, but despite a few outcrops of upmarket apartment blocks it’s still a working part of London. I noticed a Tate and Lyle factory, probably making sugar from EU-subsidised sugar beet, and an aggregate recycling plant; there were various yards that seemed to be stockpiles of gravel and sand for the construction industry. But most of the time I had no idea what businesses I was passing. I would guess some were chemical processing plants; at other times I was probably just passing behind warehouses. It was dusty and sometimes smelly, and for several sections of the walk the Thames Path ran between eight foot high chain-link fences, and felt like a peculiar and frivolous intrusion on the area. 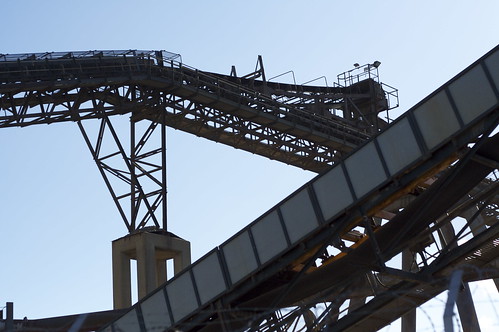 Even so, it wasn’t without bits of wildlife. There were little groups of teal on sheltered spots all along the river, and hundreds of gulls. And hopping around in that most urban of shrubs, a dust-covered buddleia,
was my best bird of the day: a chiffchaff. These little greeny warblers are supposed to be in Africa at this time of the year, but a few stay for the winter. The RSPB suggests 500-1000 birds overwinter here compared to 800,000 pairs in summer. 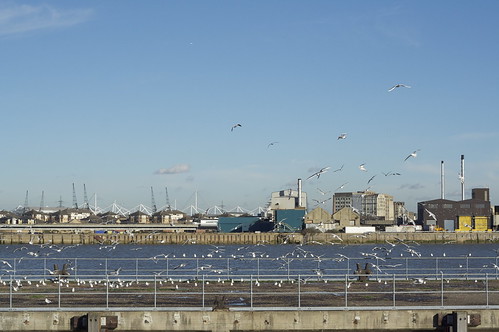 I won’t be rushing to walk this route again—once was enough—but it was interesting, even so. From here on I have a choice of which side of the river to take, so I think I’ll probably cross over the river (well actually under the river, via the Greenwich foot tunnel) and walk around the Isle of Dogs side as far as London Bridge.

» I’ve started a Flickr set of pictures from the Thames Path. All the pictures in this post come from there. I’ve also posted a picture from the walk to Clouded Drab.

5 replies on “The Thames path, Charlton to Greenwich”

That’s really cool the way you linked the set to a map – didn’t know that was possible. I did geo-tagging in Flickr for a while, but it got tiresome. This is much more interesting! (Of course, it helps that the pictures themselves are compelling.)

Some of the locations are probably a bit approximate, mind you :)

I could be wrong, but I very much doubt the Tate & Lyle plant is producing sugar from beet; that’s done in distinctive factories (with giant tanks) scattered across East Anglia. The Silvertown plant has the Lyle’s Golden Syrup lion on it, so perhaps it refines that from imported sugar.

I walked this in 2001 and I don’t think it’s changed a great deal, unlike, say, the South Bank portion of the walk. I also hear that there’s an extension eastwards, which is perhaps worthwhile if you like the industrial and modern.

You’re probably right about the sugar – it was just the first thing that occurred to me. I’m actually a big fan of the saltmarshy landscape further east along the Thames estuary proper, towards Cliffe and Sheppey. But for the moment I’m walking westwards.

That photo looks like the opera house in Sydney, Australia.