In my last Thames Path post, I commented that London’s medieval history is rarely visible except in the shape of a few street names. Which reminded me of something. When the Queen Mother (gbh) died in 2002, her coffin was laid in state in Westminster Hall for people to go and pay their respects. I was going to meet some friends for lunch, and when I arrived at London Bridge, I was startled to find myself at the end of the queue, which started in Westminster, went over the river, and ran all the way along the south bank. There was something about that moment that struck me as weirdly medieval; not just the fact that thousands of people were queuing to view the coffin of a dead royal, but the idea of a queue stretching from Westminster Abbey to Southwark Cathedral. 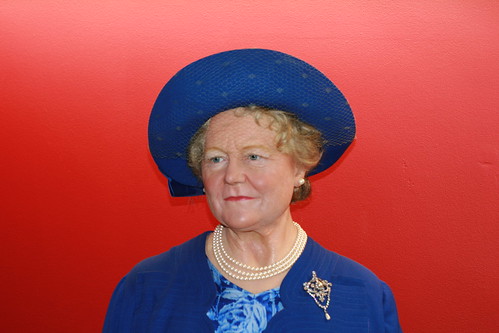 I know some people who think that the ceremony surrounding the Royal Family — the gold and ermine and glittery carriages — is the best reason for having them. And I can see the argument; it adds a bit of colour and texture to British life which is broadly harmless.

But it makes me twitchy. As long as the royals confine their activities to opening museums, launching ships, inspecting troops and so on, they don’t bother me at all. But all that pomp brings out the Oliver Cromwell in me. The symbolism of it all, of crowns and sceptres and thrones, of aristocrats in red robes and bishops in big hats is, well, medieval. In a bad way. And I know that very few people would admit to taking that symbolism seriously — it’s just a historical relic, right? — but it must surely have a powerful subconscious impact.

Though having said that, the massed pipes and drums of the Scottish and Irish regiments playing appropriately dirge-like music at the Queen Mother’s funeral were just fabulous.

» The photo is of the waxwork in Madame Tussauds. ‘The Queen Mother (Gawd bless’er)’ was posted to Flickr by xrrr and is used under a CC by-cc-sa licence.

Harry, it’s fine for your former colonies to go all republican — I’m all for republicanism in The Bahamas. But the British monarchy — which, let’s face it, ended up being rather good for Britain (well, OK, England anyway) in the later years — is far too inextricably bound up in British identity for a quiet republicanism to succeed. Britain would need a bloody revolution a la Russia or France to refashion itself without the royals, IMO.

And don’t ignore the pounds they bring in in tourist money. It’s nothing to be scoffed at, let me tell you. It’s tourist money that keeps us afloat down here, and we have to work hard at it. You can’t replace your royals, and now, thanks to Di, they’re even photogenic. The monarchy of Britain’s a brand that no one else can begin to duplicate — and which has fascinated, and will fascinate, Hollywood and other filmmakers for decades to come. Leave them alone.

I don’t get royalty.

But the British monarchy — which, let’s face it, ended up being rather good for Britain (well, OK, England anyway) in the later years — is far too inextricably bound up in British identity for a quiet republicanism to succeed. Britain would need a bloody revolution a la Russia or France to refashion itself without the royals, IMO.

It’s hard to know. At the moment there’s simply no public enthusiasm for the idea, and unless Prince Charles has an attack of the Caligulas when he gets his hands on the crown it’s hard to see why that would change. But I don’t know how deep-seated all the monarchism really is; sure, there’s no particular wish to get rid of them, but would many people go to the barricades to keep them?

And as for it being a powerful brand: yes, but in a sense that’s the problem. It is it the right brand for Britain in the 21st century? Do we really want the world to understand Britishness in terms of that lot, and all they represent?

In fact I am a pragmatic royalist. On balance I can put up with the anti-democratic nature of the institution because I can’t see the change would be worth the trouble. I just confine myself to occasionally bitching about it.