This is the Swallow-tailed Gull, Creagrus furcatus. It’s endemic to the Galapagos, and as you can see, with that big red eye-ring it’s one of the world’s more striking seagull species. 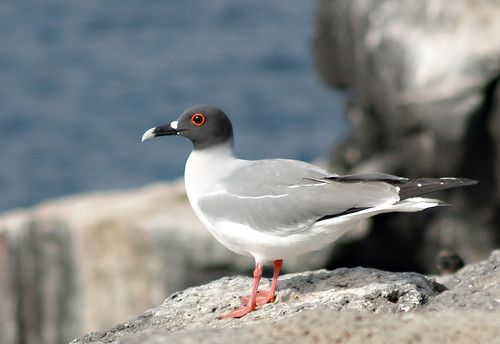 I use the word ‘seagull’ deliberately because, for some reason, it really winds up a lot of birdwatchers; they insist that the only acceptable term is simply ‘gull’.

This is of course ridiculous. ‘Seagull’ is a perfectly reasonable, normal English word; it’s mildly colloquial, but it’s not actually incorrect, unlike, say, ‘buzzard’ for vulture or ‘hedge sparrow’ for dunnock.  And while gulls aren’t the most pelagic of species — they’re not like albatrosses that only return to land to breed — most species, like this one, are more or less associated with the sea.

But then it’s not really about accuracy: it’s just the linguistic equivalent of pissing in the corners to mark your territory. Insisting that seagull is ‘wrong’ is just a cheap way of asserting your own status as a higher class of birdwatcher than the little old lady who throws bread to the seagulls from Brighton pier. Because if you’re a birder you use the right kind of colloquial words for birds: blackwit, hoodie, sproghawk, bonxie, butterbutt, mipit, sprosser… 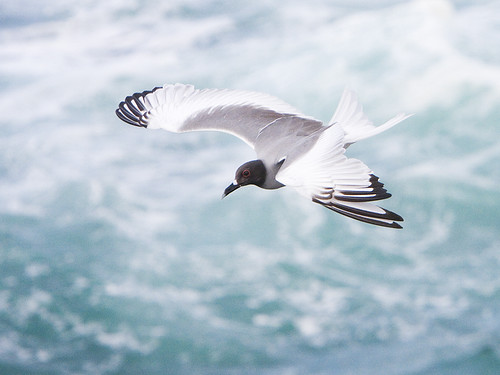 Anyway, returning from that detour to our friend the Swallow-tailed Gull (you can see the slightly forked tail in the picture above). The most remarkable thing about the STG? It’s the world’s only nocturnal gull species, which is why it has such big eyes, and it feeds on fish and squid that come to the surface at night.