You wouldn’t last long as a birder if you weren’t able to find beauty in little brown birds, but they don’t always photograph well, so I was pleased to find this lovely shot of a sedge warbler on Flickr: 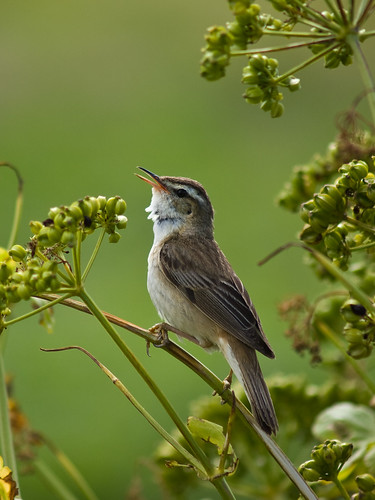 The Sedge Warbler, Acrocephalus schoenobaenus, is an archetypal LBJ — Little Brown Job — but is actually quite flashy compared to some of its relatives; with that striking white eyebrow stripe and streaky back, it can look positively glamorous on a sunny day in spring, perched on top of a bush and singing its heart out.

And it’s the song, really, which is the most remarkable thing about them. It’s a bargain that many birds strike with evolution: being small, drab and inconspicuous is great when it comes to avoiding predators, but when it’s time to attract a mate, you need to be a bit less… boring. So they sing. And the finest singers are usually found among the drabbest birds: the warblers, the larks; the nightingale.

These birds are like the anti-peacocks; the peacock has the most extraordinary plumage imaginable, but all it can do is squawk. The song of the nightingale or the skylark is an evolutionary freak as remarkable as the peacock’s tail.

The particular trick of the Acrocephalus warblers is mimicry. Sedge warblers produce a fast, rattling song, full of croaking noises, squeaks and whistles, and in amongst it all you can hear little snatches of other species: tits, finches, wagtails, coot. And apparently, as well as those European species, there are little snatches of African bird calls, learnt while the warblers are overwintering south of the Sahara. The result isn’t perhaps quite as pleasing to the human ear as nightingale song, but it’s still a remarkable thing — and the female sedge warblers seem to like it.

You can hear a selection of sedge warblers on xeno-canto, an excellent database of European birdsong I discovered while writing this post. And also its cousin, the marsh warbler, whose song consists almost entirely of mimicry.

» Sedge Warbler is © Tim Williams and used under a CC by-nc-sa licence.