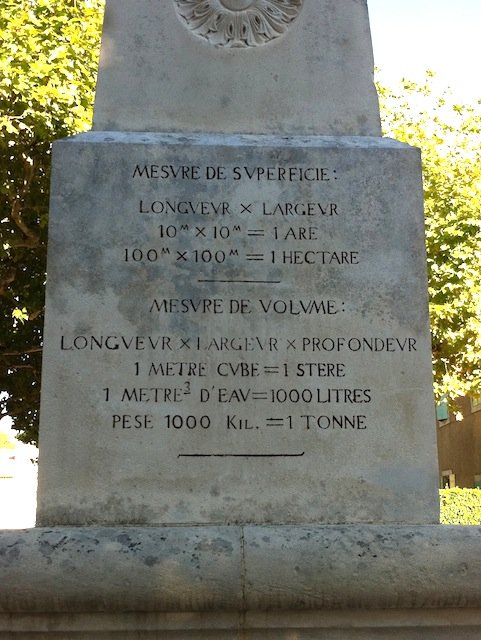 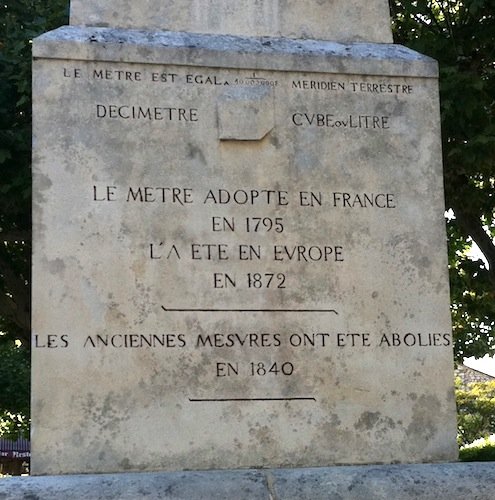 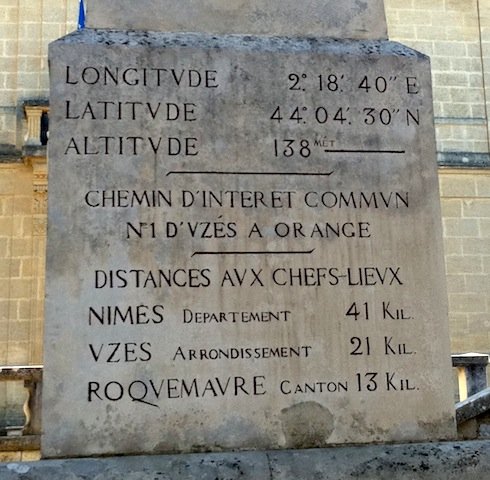 That is perhaps my new favorite piece of public art anywhere. The idea of a monument to a pleasingly efficient system that is usable by science? It’s a tiny miracle. I think the E has a nice bit of style, too, although not as personalized as the Q.

Really though, that was quite a long time then – 45 years – before they could say the old measures were abolished, and even now, or certainly a few years ago, you could ask for ‘une livre d’abricots’ (for example) on a market.

Have you read Graham Robb’s ‘The Discovery of France’? I imagine you’d enjoy it.

The ‘Q’ looks particularly funny with the Vs for U’s, doesn’t it? I suppose it was pretty much unknown in Roman lettering.

But it really is a very pleasing thing!

45 years does sound like quite a long time, but they did have a few distractions to deal with, like the Napoleonic Wars. There’s no such excuse for the UK: we committed to metrication in 1965 [a mere 275 years after the French did] and 45 years on we still haven’t completely abolished the old measures, since we have miles on road signs and sell beer in pints.

I haven’t read the Graham Robb, I’ll look out for it. It sounds like it covers similar ground to a superb book by Eugen Weber called Peasants into Frenchmen which I would thoroughly recommend. That’s where I learned the old saying: ‘Pigs and moneylenders; you never now how much they’re worth until they’re dead’.

I just glanced in the Weber to see what it had to say about metrication, and apparently despite the law of 1840, there were places where the old units were used almost exclusively right to the end of the C19th. Which raises a possibility I hadn’t considered: perhaps the mayor of St Victor La Coste wasn’t celebrating the metric system at all; perhaps instead he was advertising it, trying to educate the locals and persuade them to finally adopt the new units.

It’ll be interesting to see how long the old units linger in the UK. I imagine that for commercial purposes we should switch over fairly quickly, because the government has enough bureaucratic power to make businesses switch, and consumers have no choice but to adapt. But for things where the law has less purchase, like giving people’s height in feet and inches and weight in stone, I daresay they could linger indefinitely.

And if the sentimental exception for beer is ever removed, I’m quite sure we’ll just call a 500ml glass a pint, and a 250ml glass a half.