I made yet another trip to Bookham Common today, about my third this winter, to try and see the hawfinches there. People have been seeing them in ones and twos for some time, but over the past week there have been sightings of five or six, so it seemed like time to try again.

And: success! But slightly frustrating success. Because it turned out to be a foggy day, so I had what would normally be a pretty good view, not particularly close but perched out in the open, and instead of looking like this… 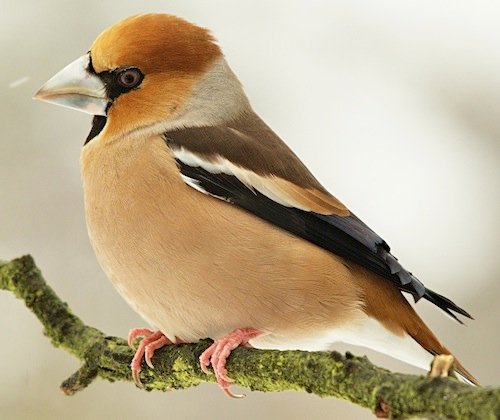 It was clearly the right species, but rather unsatisfying. A tickable view, but not much to show for a couple of hours walking around in the fog. Still, it was the first hawfinch I’ve seen in decades, so I shouldn’t complain.

It’s odd, birdwatching in fog. It’s hard to judge size and colour, and everything looks just different enough that it takes fractionally longer to identify even the commonest birds. And if you’ve gone somewhere particularly to look for a specific species, and the fog is just getting in the way, it’s mainly frustrating.

On the other hand, wandering through the mist, all your attention focussed on sound, every squeak and rustle around you… it has a pleasure of its own, if you’re in the right mood.

» The photo is © Rudo Jureček and used under a CC by-nc-sa licence.