Imagine, it is the early nineteenth century, on a still summer night in a creaky timber-framed cottage in the English countryside; and you are awake, sitting up with a sick child and a single flickering tallow candle for light.

And quiet but persistent, from somewhere in the darkness, you hear a noise.

Especially not surprising when you learn about some of other omens of death just in Oxfordshire:

local omens include crocks rattling, a spider making a ticking noise, two black crows on a line, a knock on the door with no-one there, crickets rapidly leaving a house, a dog howling, the clock striking 12 during the second sermon or hymn (Adderbury), fire burning with a bright hole in the middle (Stoke Row), a coffin shape formed in ironed linen or a loaf of bread, and a candle guttering and the grease spiralling to form a winding sheet.

It was taboo to wash clothes on Good Friday or New Year’s Day, to wash blankets in May, or to seat 13 at a table. People dreaded a picture falling from a wall for no apparent reason, scissors falling point downwards, or a glass ringing (indicating the death of a sailor). Dressmakers avoided accidentally stitching a hair into their work. It was bad luck if the eyes of a corpse remained open, or the corpse stayed in the house over a Sunday, or the funeral had to be postponed. People encountering a funeral procession would walk a little way with it to avert bad luck.

Plants associated with death include flowers with drooping heads such as snowdrops, dead flowers found outside and picked up, red and white flowers in a vase (especially in hospitals where they were described as ‘blood and bandages’), flowers blooming out of season, fruit trees blossoming twice in one year, or out of season, lilac brought in, parsley transplanted or given away, and red hot pokers blooming twice.

Many death omens were associated with birds: birds coming into the house, tapping on the window, flying into a closed window or flying down a chimney, cocks crowing at midnight, crows or owls perching near the house, and a robin perching on a chair.

They must have lived their lives surrounded by a constant swirl of portents, good or bad. Presumably most people, most of the time, shrugged it all off; but you can imagine if you were stressed, or depressed, or worried about someone’s health, you would find yourself seeing threatening signs everywhere. 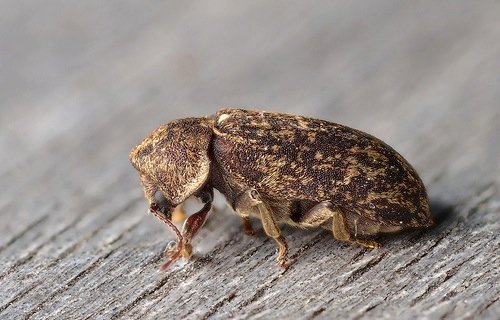 That’s what the adult beetle looks like. 7mm long, mottled brown, slightly hairy. They make the ticking sound to attract mates by banging their heads against the timber.

And it might be an omen; not of death, but of some expensive renovation work. Because they are woodborers and if the adults are banging their heads against your beams, it probably means that their larvae are munching away, hollowing them out.

» The recording and the photo are both © Gilles San Martin and used under a CC by-sa licence.

I just photographed & filmed one of these in my house. Loved the little guy until I found that he’s a wood boring menace. My cottage is a 17th century, wood filled cob building, so I don’t need to find any more!