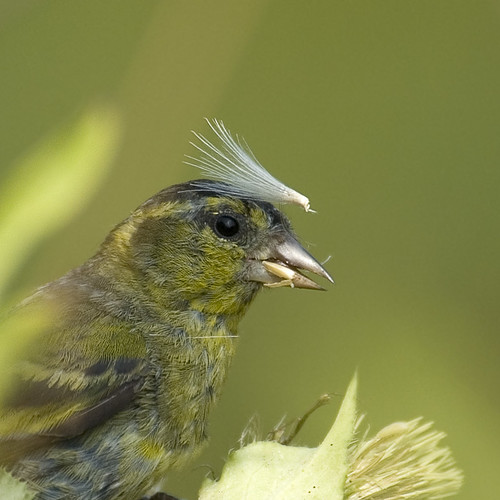 These are all species of finch that Darwin might conceivably have seen in his garden in Kent, or perhaps when he dropped off his family at the church on Sunday and went for a country walk while they were in the service. Some would have been common; others are long shots. I’ve arranged them in approximate order of beak size in the classic Galapagos fashion. 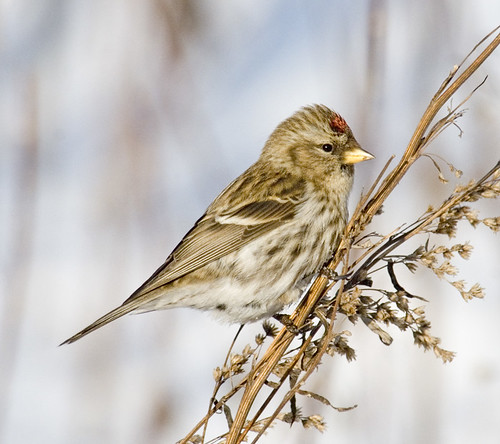 The reason the Galapagos finches make such a good teaching example is that even to a casual observer they look closely related. Indeed, from personal experience I can say that they offer a tricky identification problem: when you have several species which are only distinguished by size and shape of beak, and those features are highly variable within the species anyway… it can be frustrating. 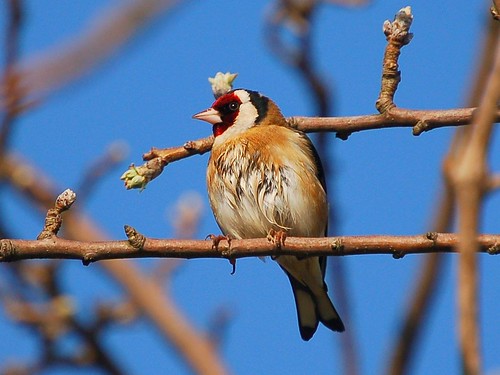 It’s very easy to use them to tell a straightforward story of a few original finches — maybe just a single pair — being blown across to the islands from South America, and then, as the population grew and split between different islands, diverging to fit into slightly different lifestyles. It is the evolutionary process reduced to the simplest possible case. 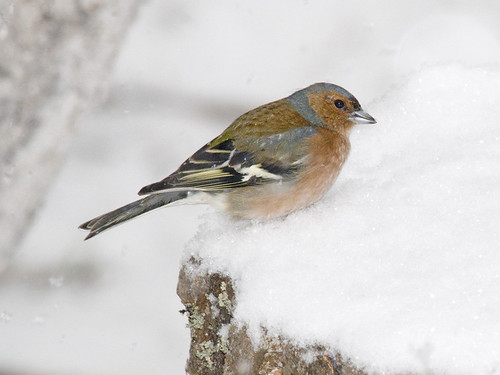 The evolutionary history of the species pictured here is no doubt rather more complicated; rather than being isolated on an oceanic archipelago, they are part of a family that ranges around the whole northern hemisphere and into Africa. And they look rather more distinct than the Galapagos species. 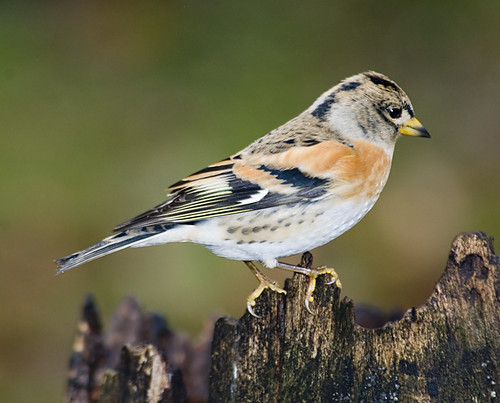 Even so, apart from a general similarity of body shape and behaviour, there are some suggestions in the plumage that these birds are related. The fact that so many species of finch have one or two pale wingbars is probably not a coincidence. And, after all, that’s what we mean when we say that species are part of the same family: they are all descended from some single ancestral species of finch. Perhaps that original finch had wingbars. Notice as well that they nearly all have slightly forked tails.

And although the story of these finches is so much more complicated and wide-ranging than the Galapagos species, it is essentially the same thing. Those first few finches may not have been isolated on an oceanic island, but it is still a story of a few ancestral birds, somewhere, who bred and spread into different areas, formed different populations, and adapted to subtly different ecological niches. There are still plenty of similarities; they are basically seed eaters, they tend to have complex songs, they are largely arboreal. But they vary from goldfinches who eat thistle seeds to hawfinches with a beak strong enough to crack open a cherry stone. 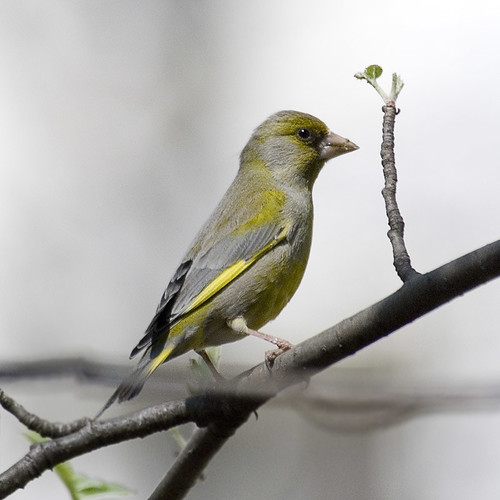 Darwin actually mentions finches in The Origin of Species. Since 1859, we have become more used to the idea that taxonomical groups (like ‘finches’) equate to shared bloodlines. But the things we know intellectually may still be hard to internalise. So it’s not surprising that, before he had told the world his idea, Darwin found people were uncomfortable with it:

when I first kept pigeons and watched the several kinds, knowing well how true they bred, I felt fully as much difficulty in believing that they could have descended from a common parent, as any naturalist could in coming to a similar conclusion in regard to the many species of finches, or other large groups of birds, in nature. One circumstance has struck me much; namely, that all the breeders of the various domestic animals and the cultivators of plants, with whom I have ever conversed, or whose treatises I have read, are firmly convinced that the several breeds to which each has attended, are descended from so many aboriginally distinct species. Ask, as I have asked, a celebrated raiser of Hereford cattle, whether his cattle might not have descended from long-horns, and he will laugh you to scorn. I have never met a pigeon, or poultry, or duck, or rabbit fancier, who was not fully convinced that each main breed was descended from a distinct species. Van Mons, in his treatise on pears and apples, shows how utterly he disbelieves that the several sorts, for instance a Ribston-pippin or Codlin-apple, could ever have proceeded from the seeds of the same tree. Innumerable other examples could be given. The explanation, I think, is simple: from long-continued study they are strongly impressed with the differences between the several races; and though they well know that each race varies slightly, for they win their prizes by selecting such slight differences, yet they ignore all general arguments, and refuse to sum up in their minds slight differences accumulated during many successive generations. May not those naturalists who, knowing far less of the laws of inheritance than does the breeder, and knowing no more than he does of the intermediate links in the long lines of descent, yet admit that many of our domestic races have descended from the same parents—may they not learn a lesson of caution, when they deride the idea of species in a state of nature being lineal descendants of other species? 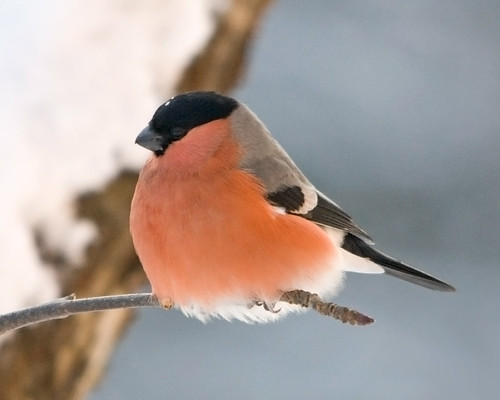 The Galapagos finches, incidentally, are not actually ‘true’ finches. That is, they are not members of the Fringillidae, the family that includes all the species pictured here. They were previously thought to be in the Emberizidae, another large family of seed-eating birds including the buntings, American sparrows, juncos and towhees. But apparently (and I’m only getting my information here from Wikipedia) the latest thinking is that they are tanagers. 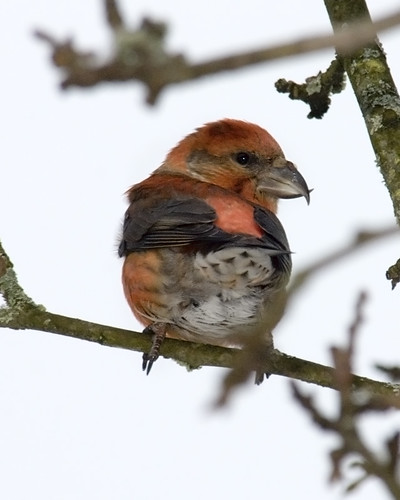 Meanwhile, DNA testing has shown another notable island family, the Hawaiian honeycreepers, are in fact finches that have evolved to become nectar eating, with long, narrow curved beaks like sunbirds. And the euphonias, a group of blue and yellow birds that were previously thought to be tanagers, have been moved into the finches as well.

These changes are part of a revolution in taxonomy that has been enabled by DNA testing technology. How Darwin would have loved it. 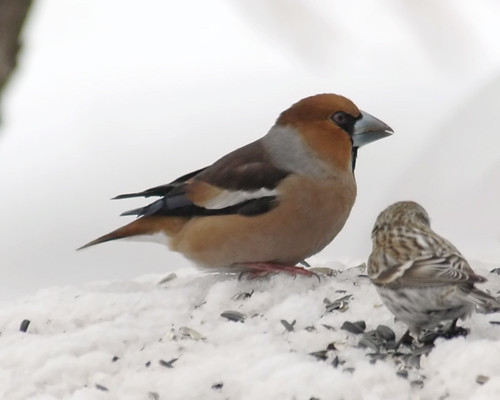