I was googling around for pictures of Satan the other day for the Satanic Verses post, and found myself at the Art Renewal Center, which, to be fair, is an extremely good source for pictures of fine art. In fact, I think I’ve been there before and assumed that was their entire raison d’être. But no: they have a Higher Mission.

This is how their ‘philosophy‘ section starts:

For over 90 years, there has been a concerted and relentless effort to disparage, denigrate and obliterate the reputations, names, and brilliance of the academic artistic masters of the late 19th Century. Fueled by a cooperative press, the ruling powers have held the global art establishment in an iron grip.

Punchy stuff, isn’t it? Those dastardly ruling powers with their iron grip! But there’s more:

Equally, there was a successful effort to remove from our institutions of higher learning all the methods, techniques and knowledge of how to train skilled artists. Five centuries of critical data was nearly thrown into the trash. It is incredible how close Modernist theory, backed by an enormous network of powerful and influential art dealers, came to acquiring complete control over thousands of museums, university art departments and journalistic art criticism. We at the Art Renewal Center have fully and fairly analyzed their theories and have found them wanting in every respect, devoid of substance and built on a labyrinth of easily disproved fallacies, suppositions and hypotheses. If, dear reader, you are not already one of their propaganda successes, I encourage you to read on.

You see, dear reader, you too can fight the good fight. Are you sufficiently committed to Art to live in fear of that knock on the door in the middle of the night? The one that means the Ruling Powers of Modernist Theory have sent out their goons? You are not alone:

Against all odds, and in the face of the worst kind of ridicule and personal and editorial assault, only a small handful of well-trained artists managed to stay true to their beliefs. Then, like the heroes who protected a few rare manuscripts during inquisitional book-burnings of the past, these 20th Century art world heroes managed to protect and preserve the core technical knowledge of western art. Somehow, they succeeded to train a few dozen determined disciples. Today, many of those former students, have established their own schools or ateliers, and are currently training many hundreds more. This movement is now expanding exponentially. They are regaining the traditions of the past, so that art may once again move forward on a solid footing. We are committed in every way possible to record, preserve and perpetuate this priceless knowledge.

We have painstakingly unraveled an understanding of how and why great traditional art nearly perished. For the sake of our children, our culture, and posterity, the Art Renewal Center is dedicated to traditional humanist art, which is essential to the health and welfare of mankind, and to a critical and truthful analysis of the modernist onslaught by which it was nearly consumed.

I’m impatient with many aspects of contemporary art myself. But the rhetoric here is priceless. There’s only one possible explanation for the shift in direction of art in the twentieth century: a cabal of tyrannical theorists and their cowardly lackeys maliciously distorting the world art market for their own dubious reasons, and remorselessly stamping out anyone who is found committing thought crimes. 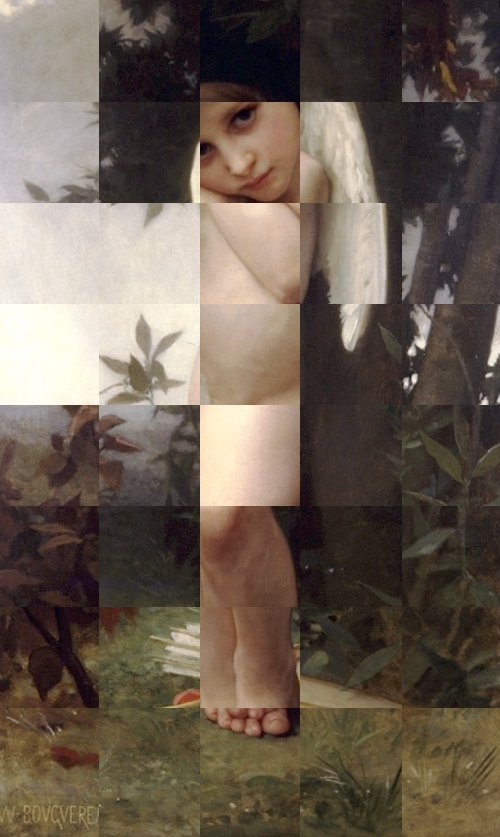 The general drift of this – that modern art is all Emperor’s New Clothes, that it is imposed from above by an elite consisting of Charles Saatchi, Nicholas Serota and that guy who faked the moon landings, and that it has lost touch with what real people like – is a commonplace of tabloid journalism. But seeing it spelled out so vehemently and explicitly crystallises just how silly it is. After all, at no point in the past century has it been illegal to paint, print, sell, exhibit, write about, or otherwise promote whatever kind of art you want. If non-representational art has become mainstream, it can hardly be put down to a conspiracy. And it genuinely is mainstream; the majority of people may still be sceptical about stuff at the bleeding edge of contemporary art, but artists like Picasso and Matisse are as big a commercial draw as any of the Old Masters.

But to appreciate the full glory of the Art Renewal Center, you have to get to the part where they name names.

As you read, you will be seeing images of masterpieces by some of those artists whose names and art were so ruthlessly maligned: William Bouguereau, John William Waterhouse, Sir Lawrence Alma-Tadema, Leon L’hermitte, John William Godward, Edward Coley Burne-Jones, Jules Joseph Tissot, and Frederick Lord Leighton, amongst others. All giants in their lives, they were amongst history’s greatest, yet prior to the last fifth of the twentieth century, virtually no mention or knowledge of their work was being taught, analyzed or exhibited anywhere.

I actually rather admire them for that. The obvious division might be between representational art and abstract art; to draw your line in the sand between the classical/academic tradition and the Impressionists is much more radical and much less crowd-pleasing. They are, however, obviously wrong.

It’s an interesting issue, though. Even if you aren’t willing to reject all art from the Impressionists onwards, there remains the point that, at the same time as the Impressionists were painting their splodgy pictures of haystacks and canals, there were plenty of artists painting in the academic style. They were continuing the tradition that had served pretty well for several centuries; they may not have been at the cutting edge, but there were many talented painters among them. Are we (by which I suppose I really mean: Am I) too quick to write them off as vapid and uninteresting?

Well, it’s always good to examine your prejudices and usually a mistake to write off whole artistic movements wholesale. But the more I browse around the ARC site, looking at the images of ruthlessly maligned masterpieces, the more inclined I am to think I was right to start with. 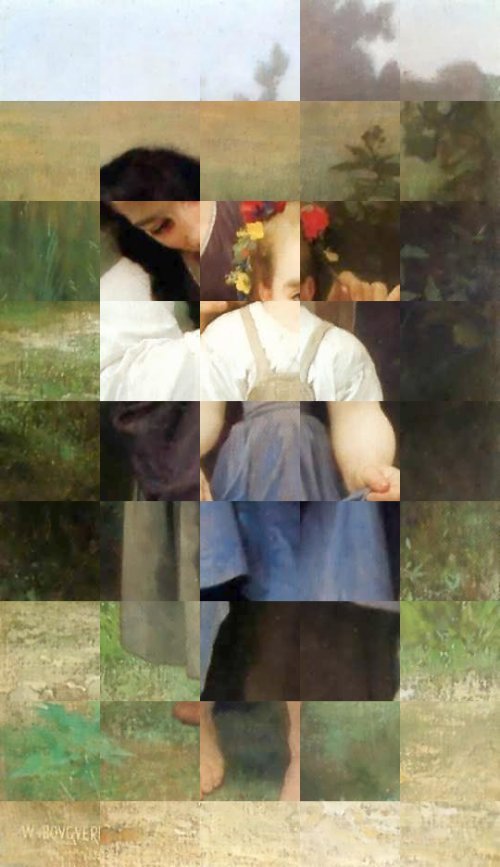 Starting with the Pre-Raphaelites; it’s striking how little of the nineteenth century there is in their work. It’s all Greek myth, knights in armour, or harems. Even the paintings that aren’t set in an exotic locale seem to take place in some kind of never-never land where the women drift around gracefully around in culturally non-specific flowing robes. In a century of urbanisation, industrialisation, increasing democracy, non-conformist religion and empire, the paintings seem wilfully disconnected from the broader culture.

So how is that different from Botticelli painting the Birth of Venus? Well, in the Quattrocento, the revival of classical culture was hot. It was one of the core ideas driving the culture forward. I am a great believer that cultures have a sort of pulse; at any given time, there are certain art forms or media or genres which are a focus of creative energy. Then, after a while, for reasons that may or may not be obvious, the pulse moves on to something else. That doesn’t mean people suddenly stop producing work in the old form, but the dynamism and cultural relevance, the snap, crackle and pop, has gone.

You can see this happening in an accelerated form in the last hundred years of popular music. Jazz had a good run of thirty or forty years when it was at the cutting edge of Western culture, but eventually it died. That doesn’t mean people stopped making it, or performing it, or going to concerts, but it became a heritage activity like renovating classic cars. The same thing happened to rock, and to soul; for some time, hip-hop has been the world’s most vibrant popular music form, but it’s been around for thirty years now, and has, perhaps, run out of ideas.

Fashions in popular music are just ripples on the cultural surface, of course. Other shifts are bigger and slower. One of those was the classical revival we call the Renaissance, which reshaped the literary, artistic and architectural vocabulary of Europe for centuries. And, you know, it had a good run. From the late fifteenth to the seventeenth centuries it was the only game in town; by the eighteenth it had reached its most polished, refined, and bloodless form, and it’s starting to feel like a mannerism or a habit. So you get the debate about Ancients v. Moderns, the invention of the Gothick, and people writing poems ‘as far as was possible in a selection of language really used by men’.

And like the poets and novelists and architects, the painters had to find new ways of doing things which were more in tune with the times. It’s questionable, of course, how much the tradition had really been based on classical models – there are, after all, very few surviving paintings from ancient Greece or Rome – but still, there were a whole bunch of habits associated with Renaissance art, like history painting, figures in ‘classical’ drapery, personifications of abstract qualities and so on, which had once been fertile sources of ideas but now needed to be thrown aside like a squeezed-out tube of toothpaste.

Indeed, the Pre-Raphaelite Brotherhood obviously understood that on some level, since despite the ARC championing them as the finest products of the academic tradition, they were actually rejecting most of it; they were medieval revivalists. Hence the name. But their solution was no improvement. They adopted some of the qualities of late medieval/early Renaissance painting, but never made any more of it than a decorative style. It’s all petals and no backbone. There was no organic connection to the broader culture. The nineteenth century was dynamic, fast-moving and chaotic; and if there’s one thing Pre-Raphaelite work is not, it’s dynamic. 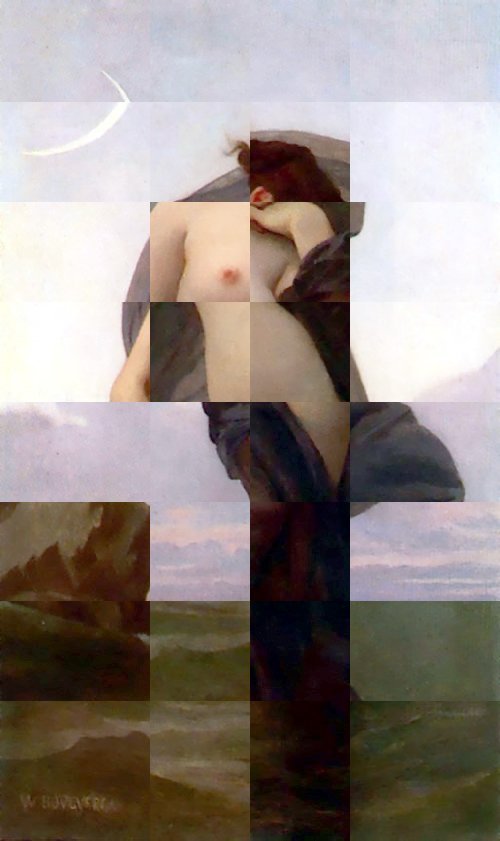 I’m going about this at some length because I find these questions of artistic taste – of changing fashions – fascinating. This is the classic argument:

And it sounds very plausible. But I just don’t think it’s true. Changes in artistic fashion may seem arbitrary and superficial, but they are indicative of something deeper. You don’t have to slavishly follow fashionable taste, but you need to take it seriously. If your poetry reads like it was written a hundred years ago, that probably means there is something wrong with it.

Of course you might be ahead of the curve. It might be that we’re due a change, that the tide is turning, that the pendulum is going to swing back, that everyone else will catch up with you later. But be warned: it’s probably not going to happen. People, like the Pre-Raphaelites, try to stage revivals all the time. Usually the tide is not turning, and you’ll just end up looking like a bit of a Cnut.

» The sliced and diced pictures above are all by William Bougereau, the favourite artist of the ARC. I particularly like the bit where they say “Considering his consummate level of skill and craft, and the fact that the great preponderance of his works are life-size, it is one of the largest bodies of work ever produced by any artist. Add to that the fact that fully half of these paintings are great masterpieces, and we have the picture of an artist who belongs like Michelangelo, Rembrandt and Carravaggio [sic], in the top ranks of only a handful of masters in the entire history of western art.” Because, of course, greatness is best measured by the square inch.

The Stuff of Thought by Steven Pinker