The beauty of cricket, and the reason it can (sometimes) hold your attention for the whole five days of a test match, is that it’s well balanced. In almost any situation, the fall of a couple of quick wickets would significantly change the balance of the match. So even when there’s nothing very exciting happening (and that’s quite a lot of the time) there’s always the possibility that it’s about to. 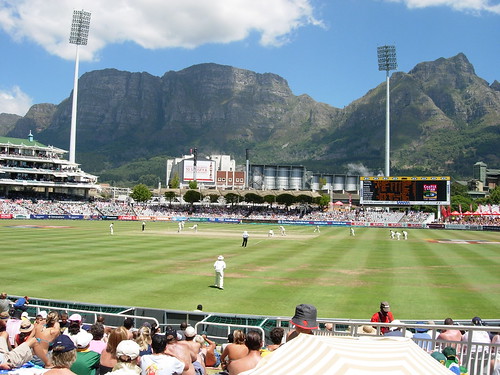 That’s probably why it’s always been so popular on the radio – because a large part of the pleasure is in the shifting of the balance between the two teams, and the mood that builds up over passages of play. Of course when something exciting does happen it would be nice to be able to see it, but it certainly works much better than most sports. It helps that they have so much time to talk between balls and between overs.

It’s probably true of all sports, of course, that to be successful they need to establish some kind of pseudo-narrative structure. Tennis, for example, would be a much less enjoyable spectator sport if the scoring system was different. You could argue it would be a fairer reflection of the balance of play if, instead of playing games and sets, they just counted up total points scored and the winner was the first to 75. But the gradual establishment of a lead by one player would have less drama than the current system, with its building up of tension towards the set points.

5 replies on “The beauty of cricket”

Have you read CLR James on the subject? I don’t know cricket — The Bahamas being one of the few Caribbean countries in which cricket is not consumed by the general populace (although it is the national sport, our tastes are more shaped by the US sporting industry, and we pay far more attention to (American) football, softball, and especially basketball) — but I do know some postcolonial theory, and Beyond A Boundary uses cricket as a metaphor for colonialism and resistance.

Here’s a link to a blog on the subject.

Cricket isn’t only beautiful, it’s been the vehicle of subversion of empire for almost one hundred years.

But a bit from James himself:

…cricket is an art, not a bastard or poor relation, but a full member of the community … [it] is first and foremost a dramatic spectacle. It belongs with the theatre, ballet, opera and the dance.

That does sound good. I’ve just ordered it from Amazon. On the subject of post-colonialism and cricket, have you seen the fabulous Lagaan?

No; we have a little problem with censorship over here. If our morals aren’t being preserved (Brokeback Mountain, City of God), the cinema’s bottom line’s being protected.

You can’t imagine what wonderful things we have been prohibited from seeing as a result.

Oh, wait — you probably can.

I’ll recommend it to the National Art Gallery, though. They have a very interesting film series that seems to slide past the censors.

Gosh, that Caribbean sunshine is suddenly a bit less tempting.

Surely the Bahamian censors can’t be any fussier than the Indian ones?

That would certainly depend on how much flexing the censors’ muscles required on any given day. Trashy contemporary blaxpoloitation films have no problem gaining approval, no matter how much (het) sex occurs and how much blood is spurted camera-wise.

As for sunshine — as the opponents of the political party who promised “government in the sunshine” used to warn: watch out for sunburn.