I’ve been meaning to read this ever since it came out because it just has the most brilliant title ever. 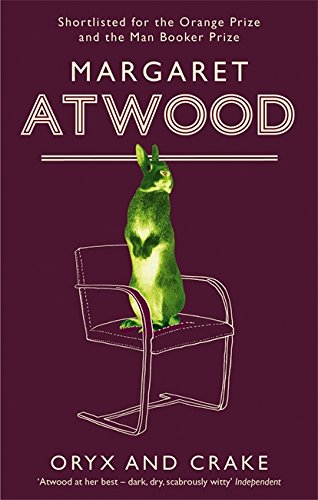 Is it just me, or is the cover of this edition really odd? It looks like it ought to be a novel about a stressed out career women and a handsome but bucolic farmer who are brought together by their shared love for a mischievous piglet, rather than a novel about everyone in the world being killed by genetically modified diseases.

Apparently Margaret Atwood strongly dislikes this book being referred to as ‘science fiction’. But by any obvious definition, a novel set in a post-apocalyptic world torn apart by unbridled capitalism and scientific hubris is, well, sci-fi. Reading it, it didn’t even feel particularly far out of the mainstream of SF. I think you’d have to have read very little SF to believe that any of the ideas here set it apart. Not that I’ve read much sci-fi recently.

I do have some sympathy with writers who don’t think that their choice of subject matter automatically assigns them to a genre, though. I mean, it really isn’t very helpful to refer to Jane Austen’s novels as ‘romantic fiction’. Though J.K. Rowling’s claim that the Harry Potter books are somehow not fantasy novels really does seem a bit desperate.

Anyway, it’s well-written, as you’d expect from Atwood, and I enjoyed it, though the post-apocalyptic bits more than the pre-apocalypse flashbacks. Perhaps ‘literary sci-fi’ would be a fair description.