Today we start with the word ‘plover’.

Belon, 1555, said the birds were so called because most easily taken in rainy weather, which modern observation contradicts.

I’ve never tried to take a plover myself, so I couldn’t judge. I’d like to believe that the OED have a crack avian behavioral research squad who were sent up into the Peak District in rainy weather with strict orders not to come back until they checked this. But probably not. It carries on with more suggestions:

…because they arrive in flocks in the rainy season… because of the restlessness of the bird when rain is approaching… Others have attributed it to the appearance of the upper plumage, as if spotted with rain-drops.

The most appealing of these, the last one, strikes me as the least likely. But judge for yourself: 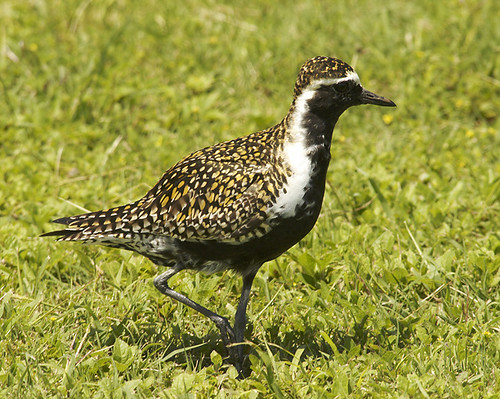 As the caption says, that’s actually a Pacific Golden Plover, whereas the original plover was presumably either the European Golden Plover or the Grey Plover (what Americans call Black-bellied Plover). But the appearance is very similar.

Plovers aren’t the only birds to be associated with rain, of course. In Britain, the obvious one is the Green Woodpecker, Picus viridis, known as the rain-bird because its call is supposed to mark the approach of rain. I can’t say I’ve ever noticed this to be true myself. The call is one of the classic sounds of the English countryside; you can hear it here. It’s often described as laughter, although if you heard a person laughing like that you’d be a bit worried. Their other common name—yaffle—is derived from the call. This is typical yaffle behaviour; hunting for ants in someone’s garden lawn: 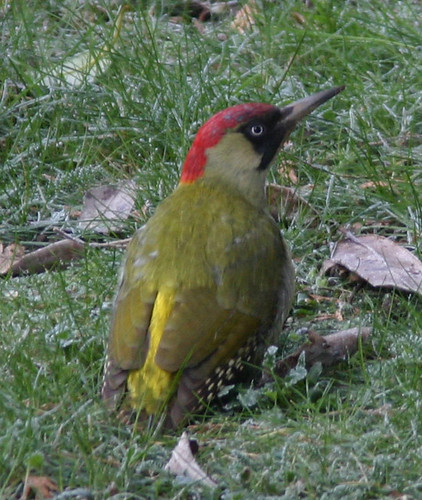 The dictionary has two other entries for ‘rain-bird’. The first is a bit vague: ‘A Jamaican cuckoo’. A little detective work narrows it down to the Jamaican Lizard-Cuckoo, Saurothera vetula. I don’t know what the connection is with lizards, but I can tell you that it’s also known as Old Woman Bird because of its cackling laugh. 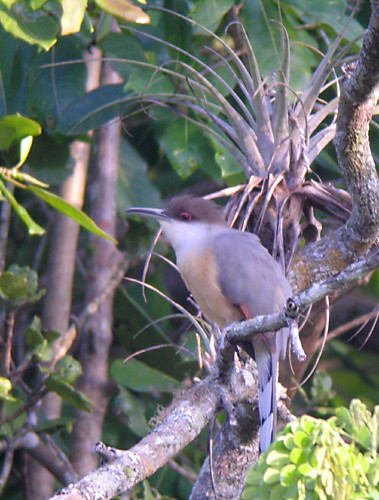 Finally, the OED also mentions a couple of Australian usages. This is one of them, the Grey Butcherbird, Cracticus torquatus: 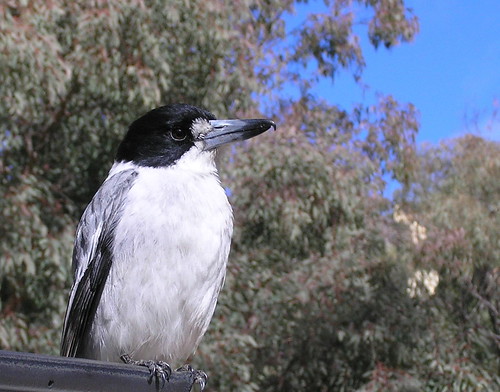 The other is the Channel-billed Cuckoo. In fact, though, Google turns up another Rainbird in Australia, the Asian Koel, also known as Stormbird; ‘Stormbird’ in turn can also refer to the Pheasant Coucal. For some information about the Stormbird’s place as an aboriginal storytime character, go here.

I know it might seem like I’m being too thorough here, but bear with me. Under the entry for rain, we also learn about the ‘rain crow’. Which isn’t actually a crow: 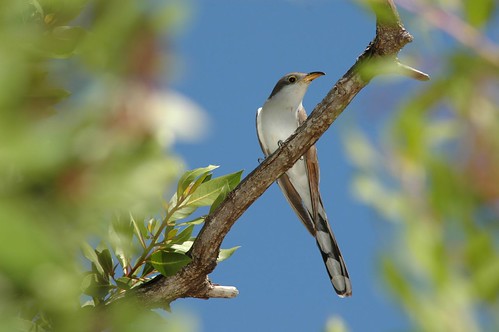 I saw both yesterday and today the Cookkoo or as it is sometimes called the rain-craw.

And yes, it does appear to be ‘craw’ unless there’s a typo in the dictionary, though all the other citations are for ‘rain-crow’. I guess you don’t employ explorers for their spelling.

As I said earlier, I am sceptical about the claim that the woodpecker’s call is an accurate predictor of rain. Some people have a disproportionate respect for traditional wisdom; in my experience it’s rather hit and miss, and weather lore is exactly the kind of area that’s likely to attract a lot of dubious theories. However, it’s very striking that of the seven birds I’ve mentioned, no less than five are cuckoos or their relatives: koels and coucals are both members of the Cuculidae. And in separate parts of the world people have, presumably independently, decided that they call more before the rain. It seems like more than a coincidence. If anyone reading this lives in one of the places where these birds live, I’d be interested to hear what you think.

Returning to plovers; the dictionary lists no less than 60 from ‘bastard plover’ to ‘yellow-legged plover’. A few of them—Crab Plover, Ringed Plover—are still standard species names, but most are old or local names for waders we now know as something else. It really makes you appreciate standardised naming. There are ten names for ‘Golden Plover’, and eleven for ‘Grey Plover’; a few can mean either. Least helpful of all is ‘stone plover’ which can apparently mean Stone Curlew, Grey Plover, Ringed Plover, Dotterel, ‘any shore plover of the genus Aesacus‘, Bar-tailed Godwit, or Whimbrel.

One last thing before I finally put an end to what was originally intended to be a short post. One of the dictionary’s citations for plover is this:

The Book of St. Albans, by Dame Juliana Berners, is a book about hawking, hunting, and ‘fysshynge wyth an angle’, and is presumably one of the sources for all those irritating lists of collective nouns: a murder of crows, a heckle of alligators, a flashback of policemen. I don’t care if it does go back to the fifteenth century, I just don’t believe that anyone has ever actually called a flock of plovers anything other than a flock. All it proves is that whimsical linguistic pedantry is a 500 year old English tradition.

7 replies on “Birding the dictionary 3”

I just love these, Harry. I loved the Robin one especially — because you know I live with a little red Robin — but even if you are engaging in a bit of whimsical linguistic pedantry yourself, these bird-word posts are nevertheless cheering.

We have lots of plovers where I work and boy, are they protective of their young; they’ve been known to dive-bomb several of us fireys if we’re outside having a smoke and a cuppa and they’ve taken several strafing runs at our fire trucks too.

That’s intriguing. I wonder what species they are?

Oh well, it might not mean much to me. I don’t really know Aussie birds. But if you do find out, I’ll be interested to know.