Following on from Dvorak, this entry was composed using a piece of software called Dasher which I learned about via Metafilter. Or at least, It wasn’t, because the Mac version is very beta and crashed, taking all my words with it. But I did write a couple of paragraphs and get some sense of what it was like.

Basically, there’s a stream of letters moving across the screen, and you ‘steer’ through them, just using mouse movements, to pick out the ones you want. The software guesses which are most likely and makes those bigger, which certainly makes it quicker when you want to type predictable things but for unusual words like ‘Dvorak’ you have to slow right down. 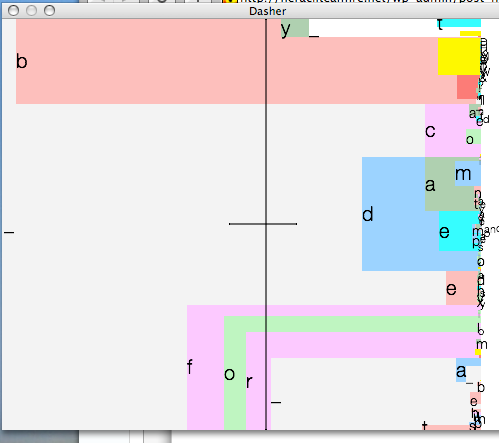 It takes a bit of getting used to, but surprisingly soon you can ‘type’ at a respectable speed.

It has very clear advantages for people with limited mobility. It doesn’t have to be used with a mouse, of course; it could be a joystick or it could track eye movements. Personally I’ll be sticking to a keyboard because, apart from anything else, all those zooming letters made me a bit nauseous and headachy.

It’s interesting, though, especially because new user interfaces seem to be in the air at the moment. The Wii, Microsoft’s new Surface, the iPhone: all are examples of machines that break away from the keyboard/mouse/joystick model and look for new ways of interacting with your computer. I’m slightly sceptical that it’s going to be easy to improve on something like a keyboard as a way of inputting type, but these days a computer is a lot more than a pimped-out typewriter. The more we use our computers to communicate, and deal with photographs, pictures, music and so on, the less central to the experience the keyboard needs to be.

Who knows. The next few years could be very interesting.

4 replies on “Another alternative to QWERTY”

I spent quite a bit of time with Dasher on Linux a couple of years ago. I was working with a seventh grader with a sharp mind and very little motor control. She was intrigued, but not enough to make the effort to use it when it was so much easier to get Mom to do her homework for her.

I was impressed with the way Dasher “learns” the words you use most often. With regular use, it could become very efficient.

I certainly found that, considering it’s like no other text-entry system I’ve ever tried, it was easier and quicker to learn than I expected. If it wasn’t for the crashing and the motion sickness I would have played with it a bit longer.

Ummm… I don’t know? I think you may have me confused with someone else.