Actually it’s not a self-portrait—I certainly wasn’t operating the camera—but it is a picture of me. Since my blogging is generally short on personal details and I’ve never even posted a photograph of myself before, I suppose a shot of the inside of my colon seems like a rather radical step. But what the hell, it’s not like any of you are are likely to get the chance to pick my bowel out of an identity parade. 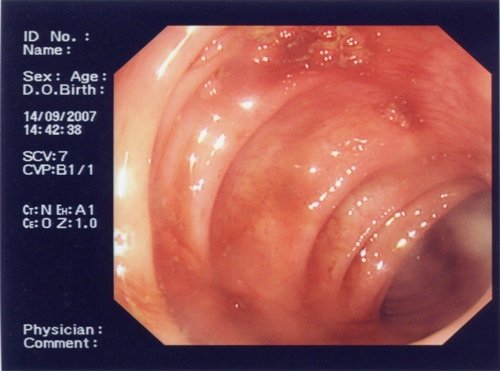 My local hospital consists of a whole lot of buildings added at different times, all joined together by labyrinthine corridors, and all the buildings are referred to as ‘wings’: the Golden Jubilee Wing, for example. I can’t help feeling that it does serious damage to the metaphor; it would be a seriously deformed bird that had five wings, all pointing off in different directions.

They didn’t seem to be terribly worried by anything they found up there, btw. Although I suppose they might be trying to hush up the fact I’ve been impregnated by aliens.

2 replies on “Self-portrait with peristalsis”

I can’t wait for you to post this one to pffa – it knocks my tonsil shots out of the ballpark!

I’m not entirely sure what prompted me to ask for a copy to take home, let alone post it on the internet. I just find the whole thing fascinating, in a slightly grotesque way.