A couple of days ago, this peculiar typewritten envelope was put through the door: 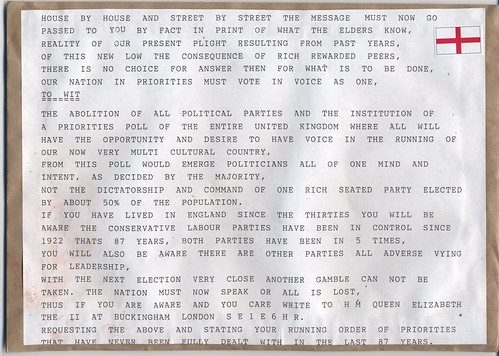 The ALL CAPS typewritten envelope reeks of ‘political nutjob’ and the red cross in the corner, for those of you who don’t know, is the English flag — the cross of St George, in fact — which during major football tournaments can be passed off as support for the England football team, but at other times tends to be a sign of racist views.

So I thought I had a pretty good idea of what the letter was going to be about, but in fact it was odder than that. For one thing, notice that the envelope starts with a poem of sorts:

HOUSE BY HOUSE AND STREET BY STREET THE MESSAGE MUST NOW GO
PASSED TO YOU BY FACT IN PRINT OF WHAT THE ELDERS KNOW,
REALITY OF OUR PRESENT PLIGHT RESULTING FROM PAST YEARS,
OF THIS NEW LOW THE CONSEQUENCE OF RICH REWARDED PEERS,
THERE IS NO CHOICE FOR ANSWER THEN FOR WHAT IS TO BE DONE,
OUR NATION IN PRIORITIES MUST VOTE IN VOICE AS ONE

Inside, we find 5½ photocopied pages stapled together, all still typewritten all-caps. From now on I’m going to start using lower-case , though, because  it’s easier to read. The writer introduces himself/herself:

Dear reader,
I introduce myself as a person who has lived in London for over 78 years since birth,
I have children, grand children, also great grandchildren,
I know of pre war years, fear free streets, open front doors and when life was simply happy for all.
I also know of the war years, and the Blitz,
also death from the skies, for like many others I was here, I also know of post war years and the happiness and joy of realising I had not died like many others in the bombings of London.
So in fact like many others I had great fear at the front of my life, my youth was taken from me,
but now in my old age once again like many others fear is deep within my final years, when my mind should be calm before I am called,
leaving behind my descendants and an England on a path to destruction,
many young as well as the majority of the old have curfew fear,
no we dont go out after dark its not safe, wrong places at wrong times,
it dousnt look very good does it.

Which is actually kind of moving. But what surprised me was the proposed solution: write to the Queen, and ask her to abolish political parties, let her know directly what your concerns are, so that she can abolish the corrupt political system that has brought us 86 years of Con/Lab government. Apparently that’s ‘the only solution to prevent the revolution that will destroy the England that you stand upon.’ Although frankly, a mass grass-roots movement to completely overthrow our political system doesn’t seem like a way to avoid revolution.

The whole thing is long and rambling and repeats itself; but the other bit that stands out is about getting police back on the streets:

As is well known there are few crime preventers upon the streets.
Ref, =coppers with legs=
Even few of those are without fear,
Why.
Because they have no means of protecting their own lives let alone the general public.
Few criminally intent go alone,
more often than not the minimum is two but the norm is about four =++,
the first thing that must be done is to reintroduce our preventers,
yes you have it, the bloke in blue with legs,
it can be done you know,
but he must be given the tools for the job.
The rapid fire sleeper dart pistol capable of a multi knock down,
not straight away of course, but who is going to kill a copper if they have a dart in their arse and sleepie byes follows a little later,
it is an ugly solution to an ugly problem but its the only one to deal with todays primitivity,
deaths will occur in instances of dart dose and alcohol combinations also drugs.
In these instances the arresting officer will be exonerated following coronas report.
In the light of the approaching recession these problems must be taken up before further degeneration takes place.
The following is a must. Stop and search vehicles for knives and guns.
Instant custodial sentence for those caught in possession, no trials.

I don’t why I’m sharing this with you really; it’s just an interesting thing. You can see the whole letter on Flickr here if you want.