One of those OMG I’M LIVING THE FUTURE!!! moments. 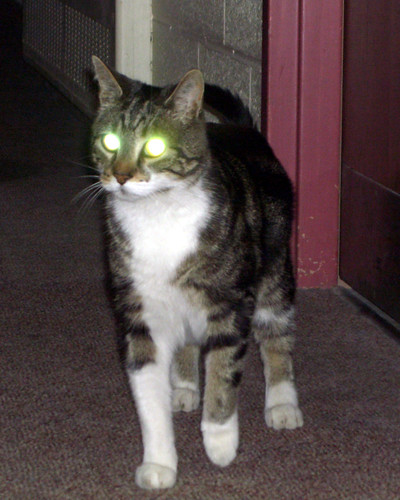 We have our cats microchipped, so that if they get lost, they can be traced back to us. But that isn’t the futuristic bit; no, the futuristic bit is that we have a new cat-flap which has a chip reader and an electric catch… so it’s a cat flap which electronically scans the cat and only opens for cats it recognises. Very Star Trek.

If I’d designed it, it would have flashing lights and a robotic voice that said cyberfeline identity VALIDATED when the cat came through. Which is just one of the reasons why I’m not an industrial designer.

» that’s not my cat, btw.  Cat with glowing eyes is © Random Tony and used under a CC by-nc-sa licence.