In theory, the coming of abstraction opened up a world of infinite possibilities. In practice, I guess inevitably, an awful lot of artists ended up producing a lot of very samey paintings. The zeitgeist traps us all. Max Ernst is one of those who stands out; I can’t imagine any of his contemporaries producing something like this: 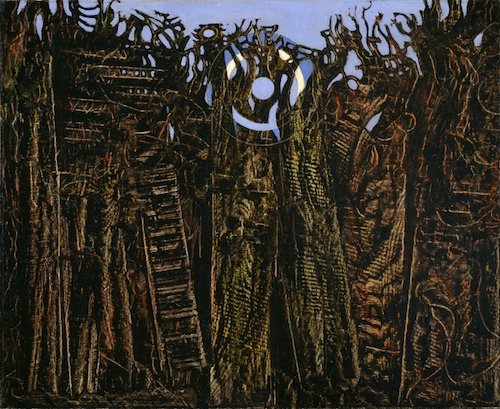 That’s Petrified Forest, from 1927, which is in the National Museum of Western Art in Tokyo (where you can see a slightly larger version). Those textural effects were produced by what he called grattage, which is like taking a rubbing with a crayon, but you do it with paint on a palette brush. It’s one of a whole sequence of forests with suns, which in turn are one of several sets of landscapes he painted, along with the jungle paintings and those like Europe after the Rain produced using another unusual technique, decalcomania.

I love the way that they are recognisably ‘landscapes’ despite the fact that, well, they’re not. And they have a great atmosphere to them. Gloomy and introverted.