I went to the London Wetland Centre for a spot of birding today, in the hope that the very cold weather might have conjured up something a bit special… which it hadn’t particularly. But some nice things: snipe, chiffchaff, skylark. Lots of ducks: a pintail, which is a bit unusual, but also wigeon, shoveler, teal, pochard and so on. And fuck me, did it look cold, swimming around on the mostly ice-covered lake. You can see why ducks need that thick layer of delicious fat.

Bird of the day, though, was bittern. Not quite as good a view as last time I went there in the snow, in February, when there were six or seven bitterns on site and I had unbelievably good views of them, but pretty pleasing nonetheless.

So here’s the painting, Rembrandt’s Hunter with Dead Bittern. 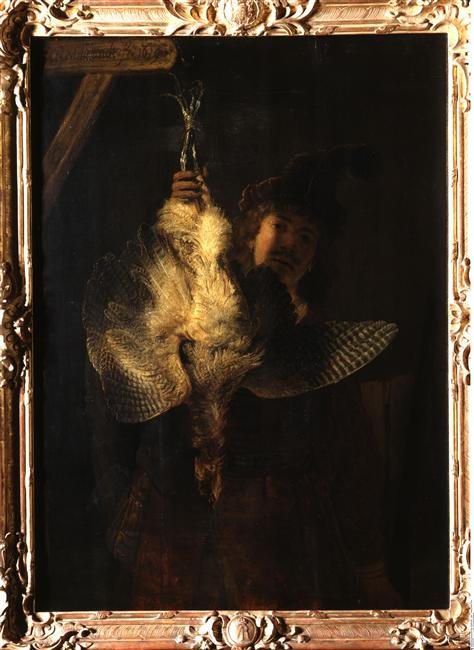 The ‘hunter’ is of course Rembrandt. The sheer number of self-portraits he painted is extraordinary. Some very straight, others in various moods and poses: as a hunter, as a soldier, in oriental robes.

You might think he was vain except that his self-portraits seem rather less self-aggrandising than those of some other artists. If he just wanted to flatter himself, he could have picked an image — society gentleman, rakish bohemian — and stuck to it. Instead he seems to be doing something more playful and more interesting. Or maybe he just liked working alone.

And while of course I don’t endorse the hunting of bitterns, which have suffered badly because of habitat loss, this picture does have me wondering what they taste like… I guess they might be slightly fishy?