Yesterday I featured a picture by a great painter of cows. To be fair, Aelbert Cuyp had many other notable qualities, including being a fine painter of skies and light… but one way or another an awful lot of his paintings have cows in. Maybe there were just a lot of cows in C17th Holland; if your country is flooded half the year, grass is a pretty good crop to focus on.

Anyway, here’s another great painting of a cow. But this is a wild cow, the ancestor of domestic cattle: the aurochs. The aurochs actually survived all the way to the seventeenth century before we wiped it out. But this is much older than that. 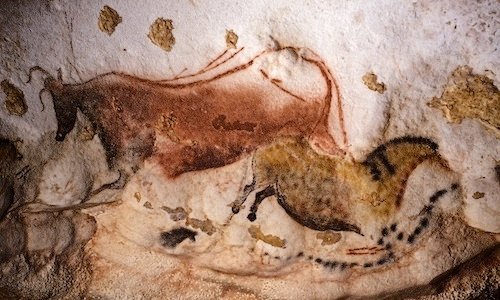 We don’t know who painted it, of course. Or why, although no doubt there are plenty of theories. What we do know is that fifteen thousand years before the birth of Christ, some people were living down inside a very dark cave in what is now the middle of France, and that on the walls, they painted the wild animals that lived around them: aurochs, horses and stags, especially. 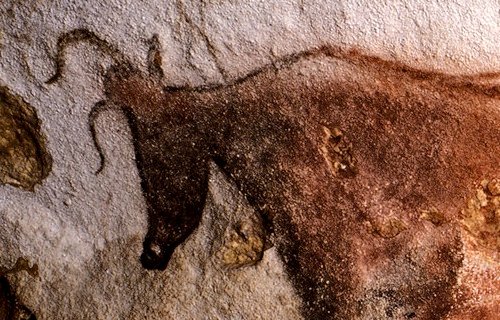 They are beautiful images, I think, but what’s really amazing is their age, and what it says about the deep history of humanity. Before the Egyptians, before the Sumerians, before Çatalhöyük, there had already been hundreds of generations of our ancestors who were at least human enough to produce art. And Lascaux isn’t even the oldest cave art we’ve discovered; the art at Chauvet is another thirteen to fifteen thousand years older. In other words, there is nearly as much time between Chauvet and Lascaux as between Lascaux and us. Recorded history is just a pinprick in comparison.

You can see more of the paintings at the Lascaux website.