2AM tonight is the start of the third Ashes test, with England one-nil up in the series and with the opportunity to ruthlessly grind Australia into the dust in the same way the Aussies have done so many times to us over the past 30 years.

So it seems fitting to pick an Australian painting; this is The Trial, from Sidney Nolan’s Ned Kelly series. Ned Kelly was the Australian outlaw and folk hero, famous for his home-made suit of armour. 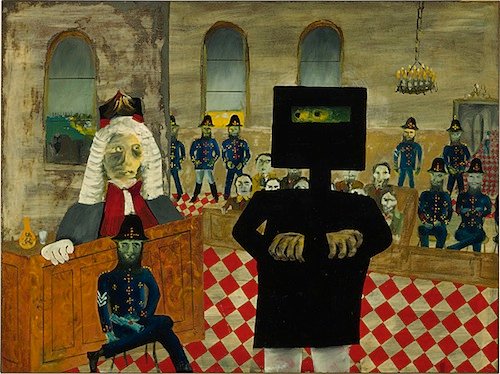 Part of his folk hero status comes from the fact that he was, according to one interpretation, rebelling against the oppressive British colonial power. Which brings us back to the cricket, since the particular best-of-enemies edge that surrounds the Ashes is partly because of the frisson that comes with a match against the former colonial power.

The Ashes got their name in 1882 when Australia beat England in England for the first time, and the Sporting Times printed a mock obituary announcing the sad death of English cricket: ‘the body will be cremated and the ashes taken to Australia’. Which is, incidentally, just two years after the execution of Ned Kelly.

Going back to the actual painting: I was interested to read that Nolan was very influenced by Henri Rousseau. Because I reckon that Rousseau actually wanted to be a proper painter in the classical academy tradition, but having taught himself to paint in his spare time as an adult, he just wasn’t technically capable of that style of painting. The paintings he did produce are beautiful — he had a great eye for design and colour — but they are in a naive style because that was all he could do. Which is something rather different from the self-consciously naive style of a painter like Nolan.

Anyway, there are a lot more paintings by Nolan (and indeed other Australian artists) on the National Gallery of Australia website, if you’re interested.